When we went to The Rising Sun last night the grass was already frosty and after a very good meal, a place to be recommended we walked back in a hard frost. Overnight the temperature dropped to -4.8 and was still below -2 at 10 am. this morning and there was a very thin layer of ice on the cut. 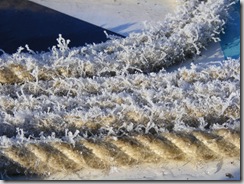 We didn't set off until 10 30 am as John and Madeline who live just up the road from us came by on nb. Maximus and stopped for a chat. We head off in bright sunshine passed the long row of boats that moor at Shackerstone and out into open countryside again. The frost hung in the trees shining in the bright morning sun and there were a few walkers enjoying the day. The light as we entered Snarestone was quite enchanting with the sun still low in the sky, reflecting down the canal and straight into the tunnel mouth illuminating the inside of the tunnel for half its length. What did surprises most was that between bridges 60 and 61 the canal was covered in ice about a quarter of an inch thick and we left a clean channel down the centre.
We winded at the old head of navigation, moored up and went for a look round. There is now a pedestrian swing bridge where the head of navigation use to be over what will be the stop lock gates. This is locked in the closed to navigation position.  Beyond this bridge there is a wide concrete channel with both sides marked at 48 hr moorings. 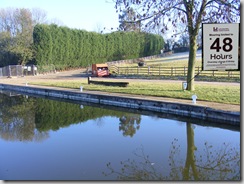 The interesting thing is these are Leicester Council moorings, not BW or Ashby Canal Trust and the wording states they are 48 hr moorings for continuous cruisers. On one side there are a row of old "company" boundary markers which I take are to be used an mooring bollards, but the other side there is nothing, only a concrete edge and a hard path. We made our way back along the canal in the bright sunshine and at the tunnel portal it was impossible to see the entrance until we were right against it due to the bright sun and haze, if conditions were like this on the roads its no wonder there were lots of accidents, visibility towards the sun in some circumstances was zero and we were only doing 2 mph not 70.
As the afternoon progressed we started to look for a nice spot to moor for the night, the battle field moorings were discounted as they were shady and still icy, a boat was already moored by the old disused railway bridge, 2 boats had settled in on the open section opposite the wood, we could have got between them but why spoil there solitude, next was the visitor moorings by the visitor centre, the same boats here now than when we passed yesterday plus one had squeezed in between a narrow boat and a cruiser and had 5 foot of his bow rubbing the bows of the cruiser, one had a notice saying it was an allocated mooring and the rest looked as if they had been there some time so we continued on past the visitor centre and then the long row of long term off side BW moorings to moor a little after 4 pm on the towing path just beyond the last boat. 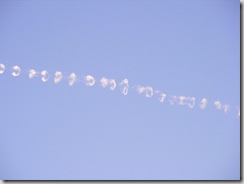 A  few minutes after getting tied up a Chinook helicopter came over very low and a few minutes later an aircraft flying high leaving a vapour trail that turned into smoke rings before fading away in the clear blue sky.