There is only one restaurant at this end of Littleport and they do a fixed price 4 course meal for £39-50 but the cheese course is complimentary, I couldn’t quite work that one out. It only opens twice a week other than for private functions, last night was one of the function nights with about a dozen men sitting at two tables.

Overnight it rained almost constantly, stopping just as we pushed off at 9 am but starting again quite soon afterwards. The reason for our early start was that we had to navigate a very silted up Denver Sluice and I wanted to see at low water where the best channel was. Just as we moored at Denver the rain stopped and the sun came back out. The silting is so bad now that the lock is virtually unusable on a 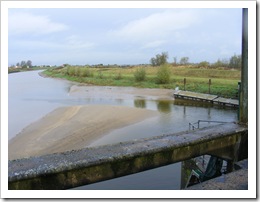 neap tide. When we visited 3 years ago 3 boats sailed straight out of Salters Lode on the level, up the Ouse and straight through Denver Sluice on the level. Today nothing bigger than a canoe would get through on the level with only about 4” of water between the sand banks.

The lock keeper was very doubtful that we would get out today as we would need about another 3 Ft. to do it safely. The seagulls could walk across the channel at the moment, but it was almost 4 hours to the top of the tide. One possibility was to go out backwards as far as the sandbank and then forwards between the sandbank on the left and the front of the sluice but he could not recommend it.

To waste a bit of time we walked around the area looking at the relief channel and where you locked down into it. There are 3 lots of moorings on the channel and a possible thing to do if we can’t get out.

At about quarter past two we went back to look at the water level, High Water at Kings Lynn was 1345 hrs. and we had gained about 12” but it was still rising very slowly. Chatting again to the lock keeper he enquired as to whether we had a Bowthruster, if so we could easy out of the lock, swing 100 deg to the left, slide along between the sandbank and the front of the sluice until we hit the New Bedford River and then sharp right downstream to salters Lode, but of course it was up to us and I was game. We  we didn’t do this today we would be stuck here until next Thursday morning as tomorrow is the last daylight tide and its only about 6” more than today, also tomorrow wouldn’t be the resident keeper so the chances of sliding round the back would be less. 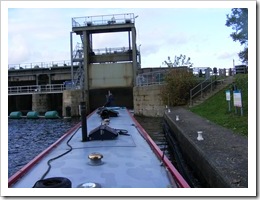 The lock keeper got the lock ready and I got Harnser ready and we were soon in the lock, as soon as the bottom gate was up I crept forward, used the bowthruster to pivot the boat round to the left with the stern at the lock entrance, then 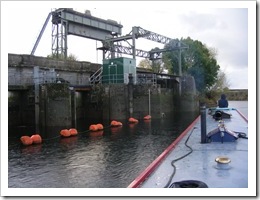 slowly forward towards the New Bedford River, easy to the right as I approached the channel to miss the sand bank on the point and then off down river to Salters Lode where Paul had the lock ready for us. I thought we were on slack water by now or even starting to run out so 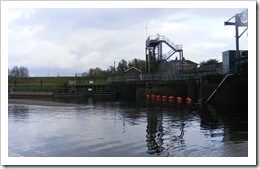 I swung hard left to line up with the lock entrance which points downstream, however the tide was still making slightly  which caused me to cut the corner a bit and I had to give it a bit of welly to get her bum round before just

drifting into the lock, it was now 3 pm. Paul locked us up and we have Moored for the night on the lock moorings as we wouldn’t get to Outwell before dark. 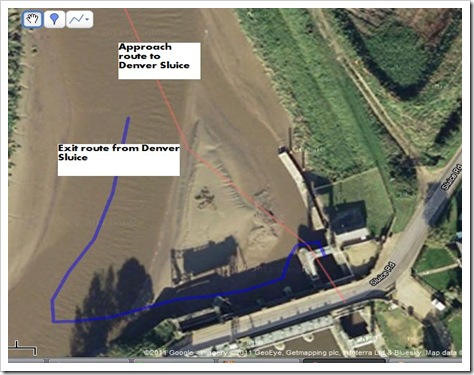 Posted by Brian and Diana on NB Harnser http://nbharnser.blogspot.com at 17:07

Excellent account of what must have seemed like a potentially long day! Thanks for putting it together.

You're a better man than I, Gungadin, No very well done it must have been very interesting, the thought of getting stuck and being there of a week would have stopped me.

I didn't know I was likely to be stuck forseveral days when I went, it was just when I tried to come home.