Last night we checked out all the beers on offer at The Trout and were treated to cold Yorkshire Puddings. While there we got chatting to the people from the boat breasted to us.
Overnight we had plenty of rain and it was still trying at 9-30 this morning when our neighbours pushed off upstream, we left about 10 when the rain stopped to go down stream. There was noticeably more flow on the river today but we only saw one other boat on the move.

At Newbridge it looks as if The Maybush Inn is closed for redevelopment.

It was here that we caught up with a team who were electric fishing. The boat they were using looked very modified with small rectangular dinghies mounted there side of the main hull as outriggers and a frame work on the bows supporting the earth electrodes. 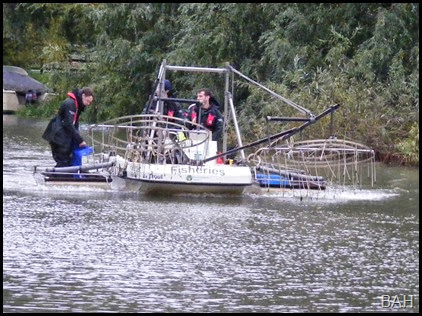 We got quite close to them as they sheared two locks with us, in each case we went in first and they came in close behind. They  were returning all fish back to the water after removing a scale sample. The said they had caught more fish than they had expected so that sounds good.

Between Northmoor and Pinkhill Locks there are some old chalets standing up from the river. 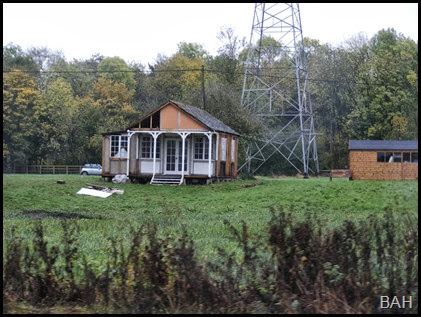 There is also this place which somehow seems a tad out of place. 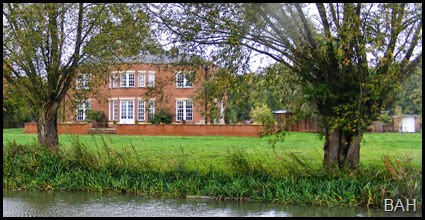 but were just getting the lock ready as we arrived, so again I went in first and they tucked in behind us. It wasn’t the normal cheery lock keeper on duty which was just as well as they didn’t stop their outboard and one of the outriggers caught the gate on the way out. Well it was rather unwieldy in a lock being wider than it is long. 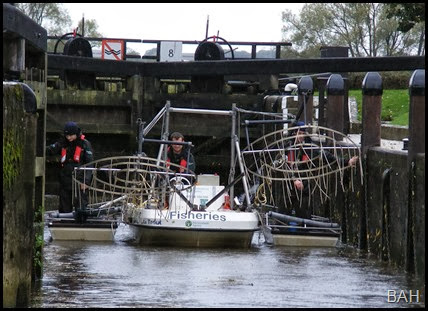 We continued on down to Eynsham Lock where we stopped to fill with water. For those that don’t know EA waterpoints consist of a 1” diameter fire hose on a pull out reel that fills a normal tank in minutes. Luckily this one also had a standard bib tap. I say luckily as there was a barge on the 24 hour moorings adjacent to the water point and they appeared to be filling their tank with the red hose. I say appeared as the hose was full of knots and was connected when we arrived. Our tank was just about empty so we used our own hose on the half inch tap and had time to make coffee as well as sit and drink it before our tank was full. When we left there was still no sign of life on the barge and the hose was still poked into their boat. While we were doing this the chaps on the electric fishing boat arrived, packed their stuff away and went home.

Below the lock the EA chap had his van parked, has the EA been bought out by Welsh Water by any chance. 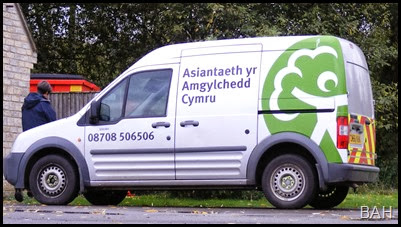 Arriving at Kings Lock a chap who we assumed was the lock keeper crossed the lock and opened the gates for us, closed up behind us and worked us down. The lock had its “Self Service” sign up, but that means nothing because several of the manned locks had them up and some only had them up at one end.

We thought we would moor at the old Abbey at Godstow as now that the EA have brought in their mooring restrictions there was plenty of space, what there wasn’t was plenty of water, so that was a none runner.

Godstow lock is the first automated one that we have done this trip and it was unmanned, but Diana sorted it with no problem. Passed Port Meadow and in through Sheep Wash and Isis lock on to the Oxford canal. There was quite a flow of water coming from the Thames and through sheep wash which I wasn’t expecting.

Back on the canal finding a mooring was the next job, we finally tucked in on the end of the visitor moorings below Aristotle bridge, we are a bit closer to the bridge than I would have liked but we didn’t expect much more traffic as it was quarter passed six. Wrong, a little after 8 a boat went by.

You are just ahead of us then - should be back on the South Oxford or, at least, in Oxford tomorrow