Firstly yesterdays little quiz, several replies and one almost correct, it is 15A.

Set off with another sunny morning just before 10-30am About half way passed All Oaks Wood there was a dead pony in the canal, not the best start to the day.

We called in at Lime Farm Marina for diesel but unfortunately they were closed so I filled up at Hillmorton wharf at 87p and I am now £240 poorer.

There are still a lot of Sloes along the canal on the offside so we pulled over and picked another tub full, that will do another couple of bottles of Gin.

We passed one moored boat with an interesting cratch frame, I wouldn’t want to have to make a cover for it. 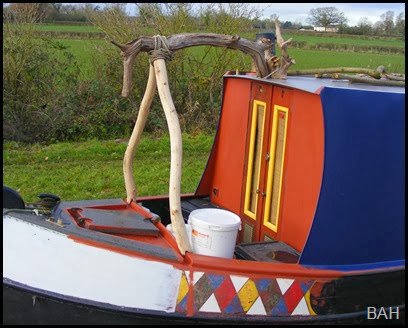 Coming up Hillmorton locks there was still a boat moored on the lock moorings, not the same one as last time, I do wonder if the boat yard use this as their waiting area for boats to have jobs done. 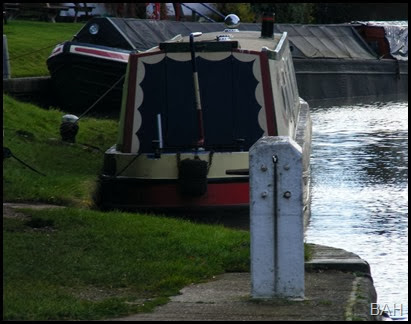 There are now several wide beam boats in Barby Marina as well as lots of Narrowboats.

The only pinch point I could see coming from Braunston with a wide beam is a removed bridge near Willoughby which looks about 12ft.

At Braunston Turn we turned right into Braunston and I have never seen the place so empty. There were only two boat on the 14 day moorings north of the A45 bridge, lots of spaces between here and the turn. We have only gone as far as the next A45 bridge on the GU section but there were loads of spaces here as well.

It was almost full up last weekend!

Yes we called in for water and coffee on Matilda Rose. It that is the Linda I think it is we saw your boat as well, have you taken a winter mooring or just visiting?