It wasn't quite so so cold where we were moored last night at the bottom of the locks and there was only a light bit of frosting about when we set off this morning at 10-30.
I go 60 years without seeing a Kingfisher catch a fish and then I see three in two days, that's 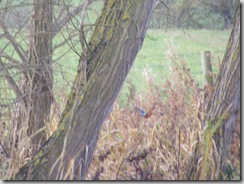 right, the only Kingfisher I saw today dropped into the water and came out with a fish. The good thing about this is that once they have caught something they have to go to a branch and kill it before eating it, so stick around giving you half a chance to photograph them before departing into the distance. 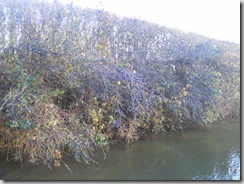 There are still some very good crops of Sloes about if you are into making Sloe Gin, we picked and jared ours last time we were on the boat, we will probably bottle it over Christmas and keep it until next winter.

We didn't see another boat moving until we reached Banbury where we met Mark Paris heading back to Thrupp, we were also in the pub with him at Thrupp just like the boater Mark who we met yesterday. The first job to do in Banbury was to visit Sovereign to fill up with diesel at 70p/lt. If you need diesel and are in the area best hurry because he is closing on the 1st. December for 2 months over Christmas. After taking on 140 lts we reversed back down into town to eat lunch and for Diana to do a bit of shopping while I did important things like talk to local boaters.
When Diana came back we pushed off northwards, by now it was quite overcast. Just above Hardwick Lock we came across our first bit of ice on the canal just before the motorway, it was very thin and already broken. The lock cottage at Bourton Lock still looks the same as it did 12 months back, I fear that if there is no progress soon it could well get vandalised again which would be a great shame.
As we approached Cropredy there was a large section of visitor mooring free so we pulled in in the glom at quarter to five with a view to visiting the Red Lion tonight, we hope this will be quieter than the moorings by the lock where we could hear the church clock well into the night.

We've never managed to keep the sloe gin for the next year, I know it should mature, but a year?

It's OK once you have a stock built up