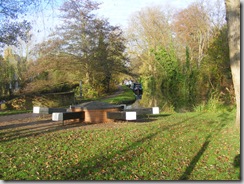 Bangkok House. There were surprisingly few people walking past the boat late at night, but we were woken in the early hours by a lot of shouting up on  the main road and we hoped that they wouldn't venture in our direction. On e of the best thing about  the moorings was that you didn't have boats coming passed. 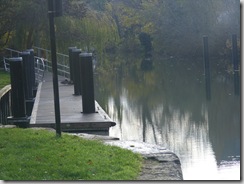 This  morning we set off at 10 am reversing back to ISIS lock and then dropping down the lock to wind. Since they have put the new floating pontoon below the lock there is insufficient room to swing the stern to the left when leaving the lock to make the tight right hand turn to the Thames and I couldn't even get Harnser round in one and we are only 57 foot, I hate to think what it would be like getting a full length boat round. The pontoons actually take up 11 feet of water, right where you need to swing the stern. If they had just piled the bank and lowered it a couple of feet it would have been fine.
We continued on back to Thrupp with Diana working the lift bridges this time. At Thrupp we stopped to fill with water and pump out the toilet tank. Thrupp Boat Club now have a pumpout machine that is card operated and costs £12 for 9 minutes, you could probably pump to boat tanks in that time.  Once this was all taken care off we were off yet again, by now the sky was very clear and the temperature was starting to fall even with the low sun. We continued on up the River Cherwell and into Bakers Lock which still stinks of diesel and there is still quite a bit 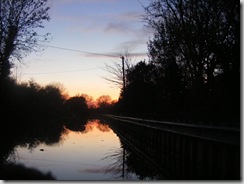 floating on the water. By the time we reached Pigeons Lock it was getting dusk and as I dropped Diana off to operate the lock the bottom gate opened and shortly afterwards a boat emerged, we were soon through the lock and moored in the same spot as Saturday night, the light was going fast and turning cold, only 2 Deg.C and it still wasn't quite 5 O'clock.