Well to say last night was a mistake was an understatement, we 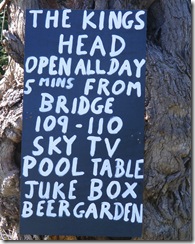 walked  up to The Kings Head at Napton, there was a car in the car park and I think there were 2 people in the bar. I asked if we could eat only to be told they had finished doing food, well it was 8 o’clock. They have more signs than any other pub in the area along the canal advertising how great the place is, no wonder its empty, I bet the Folly and the Bridge weren’t empty at 8 p.m. so it was back to the boat for a tin of stew and dumplings.
The moorings here are a bit shallow, I couldn’t get the back in, but by the time we turned in for the night there were 4 boats moored here.

This morning started early with boats passing well before we were about. the sun was streaming in and we pushed off at 9 30 am. Diana has a sniffle and I have the Flu, well I am a man. 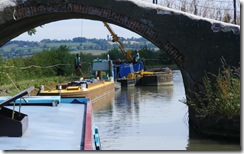 BW are hard a work piling where the bank has collapsed but all there equipment makes looking through the bridge hole for oncoming traffic a bit difficult.

We made steady progress to Braunston

where we filled with water and emptied the rubbish. The old boat on the puddle Banks has sunk again, but it now has a trade plate attached to the cabin side. The other sunken hulk is also still there.

As we made our way to the bottom lock two boats were coming out and a single handed lady waiting to go up so we slid in with her. We were lucky in meeting boats in most pounds but we did catch up with 2 boats going up at the third lock which was surprising. As we left the top lock the hotel pair Duke and Duchess were coming down. Braunston tunnel is the driest I have ever known it with only two drops of water on the roof all the way through. We didn’t meet anyone in the tunnel but we were following the boat that locked up ahead of us which limited our speed somewhat.

At Norton Junction we found “Sunset” a Rose hire boat moored up with Richard and Rachel on-board. We met them on there last canal holiday when they went south along the Oxford. After saying hello we both set off down the flight, the top lock was full and one gate was open so things were looking good. We met several boats in the flight, so we were saved shutting most of the gates when we left. One of the pounds was well down as can 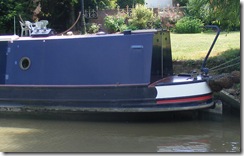 bee seen from this moored boat which is hard on the bottom with its propeller on view. We continued south both mooring for the night at Weedon. One things for sure, passing boats don’t slow down in these parts. We will have another try at eating out tonight, there must be somewhere in Weedon that does food.