Yesterday evening the weather improved quite a bit and by the time we went to bed the wind had died away and the moor was lighting up the sky.

We woke to a bright morning with little wind, the boat  ahead of us had already left. I went up onto the flood wall to take this shot of our mooring. It was OK but we did hear the traffic on and off throughout the night.
We set off at our normal 10 am start and turned sharp left 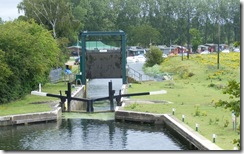 through the flood door and on to our first guillotine lock of the trip. Most of the gates are automated now and you just have to stand with your finger on the button for about 30 seconds to raise them, but before anything will happen you have to have the top mitre gates completely closed, If a bunch of weed gets between the top gates then the guillotine gate lifting mechanism is locked out. When you leave the lock you have to leave it with the gate raised. This means that going down stream you have to drop the gates and fill the lock before you can enter, but then you don’t have to hang about when you leave the lock to close it all up.
Just through the lock is the Northampton Boat club, this is an AWCC club but it doesn’t look very inviting to passing boaters with all its “No Mooring” and “Private”  signs. A little further down 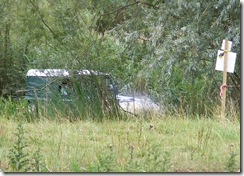 stream and you are in Billing Aquadrome land, they have a marina, static caravan site, touring caravan site, Off road driving course and also host several large events, this weekend it was a Landrover gathering with dozens of them on the camp site and the more serious ones on the off-road course.
As we passed the entrance to Billing Marina a cruiser shot out behind us and followed us down stream so we were expecting to share a few locks with him, however as we entered the lock cut to Cogenhoe lock he turned round, but there was a narrowboat waiting to enter the lock, so we had someone to share with after all. 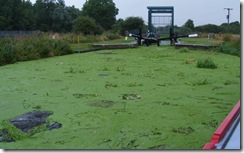 At Whiston Lock not only was there a boat about to leave the lock which meant we didn’t have to fill it it but there was quite a bit of flotsam in the river above the lock, I have no idea why this had all collected at this particular lock but it was quite thick.

At Earls Barton Lock we were watched by a family of rather fine horses, I take it this is where the saying “You scratch my back and I’ll scratch” yours comes from.

The other boat left us just below Woolaston lock to take up there new moorings in the weir stream and we spent the rest of the day travelling alone.

There were a few boats moored in Wellingborough by the park, but we didn’t fancy this as its right opposite the mill which emits a constant whine, so we carried on to the Irthlingborough moorings outside the Rushden and Diamonds football ground. The football club use to sponsor these moorings and there use to be a

toilet pump out and fresh water point available on the moorings as well as showers and toilets in the club building. Unfortunately since the club has been in administration these facilities have been closed, a great lose to passing boaters. When we arrived there at 4 30 pm there were only one other boat moored here, by 7 pm there are 5 of us.