Off to the Nene day 7

After shampooing the starboard side of the boat with Phil Speight boat wash we were ready to set off at 10 am. Just as we were about to leave a couple came down to the pontoon with 2 canoes, they had planned to canoe to Peterborough and back, but I have doubts they got all the way there before turning round. 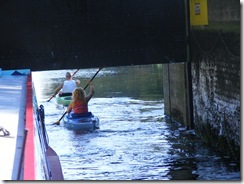 As we entered Waternewton Lock they came paddling up behind us and asked if we minded if they shared the lock as there is no porterage point, It made little difference to us so they joined us, heading away well ahead of us.The same thing occurred at Alwalton Lock, here the banks are particularly high for getting out of a canoe, but they have left a hole in the fence to pass the canoe down to the down stream landing. About a mile further on they had pulled over to have something to eat.

As we approached the entrance to Ferry Meadow lake and mooring we caught up with an ex Canaltime boat who turned into the lakes. We continued on down to Orton Lock and made it ready to enter, we had just gone in and closed the gates when I spotted a Narrowboat coming down behind us, so we waited and it was the ex Canaltime boat again, he had just been into the lakes for a look. He was very interested that I held the boat  both to the side of the lock for him to come in and also held back while the lock emptied, he had never used his centre rope, both him and the misses had jumped off with a rope rope at each end. I didn’t like to tell him that if I had been alone I wouldn’t have used a rope at all.

Below the lock the new moorings and lock landings are looking splendid, the sign says it cost £800,000 to refurbish them which I quite believe. I would not want to be on the river if the water was high enough to have to use the high level landing stage and I would imagine for normal use it would be quite noise but fun watching the canoeists.

We stopped by the park to do a pump out, well its hard to pass by when its free and I have heard that the one in March is not to good in the suction department. While we were there the crew of Balmaha walked up to tell us they were moored against the park down stream of Stanground as there was a funfair on the park and we would be very welcome to join them for a cup of tea, as we had almost an hour to spare before locking through to the middle Level that is what we did.

Quarter to three saw us outside Stanground Lock waiting for Tina to lock us down, but she already had a Narrowboat in the lock coming up so we had to wait for them.

We had planned to stop in Whittlesey for the night on the visitor moorings by the Manor Sports Ground but there were already 3 boats moored there, one of them was there when we came up with no one onboard, so we have moored for the night on the other side just before the lock waiting landing. Shortly I shall be taking Diana out for a slap up meal at Weatherspoons.

Posted by Brian and Diana on NB Harnser http://nbharnser.blogspot.com at 19:05

Spotted you today, apologies, we didn't realise, though the name Harnser rang a bell. Had to google you this evening, (it would be rude not to). Enjoy your time on the Nene and Middle Level.
Best wishes,
Kevin and Linda aboard N. B. Tranquility

Spotted you today, apologies, we didn't realise, though the name Harnser rang a bell. Had to google you this evening, (it would be rude not to). Enjoy your time on the Nene and Middle Level.
Best wishes,
Kevin and Linda aboard N. B. Tranquility