We arrived at the moorings a little after 2 pm to find Dave firing the BBQ up for the first time this year. Following loading the boat I set to refilling the domestic water system. I would have been easier if I had remembered to open the stop cock on the tank outset first. We didn't have sufficient water in the storage tank to full charge the system so it was out with the hose to top the tank up. We needed to fill up before leaving as we are planning a few days on the Middle Level and there is only one water point and that is in March. Next job start the engine, to say that the starter battery was not over enthusiastic would be an understatement and I think I need to put a new one on the bring back list. The voltage was sitting at 12.3 before I tried to start her, but it picked up straight away, not sure how it would have done if the temperature had been around zero. Engine running, water tank full, stove alight so it was time to go. Ropes off and at five to three we were sliding backwards out from our mooring, today we were turning west for a change. The sun was very pleasant but the stiff breeze was quite cool, about half a mile up the river we forked to the left down towards Benwick, half a mile down the cut and we cam on two men is a small rowing boat trolling for pike and zanda. Our planned destination for tonight was the public moorings in Benwick but getting there was dependent on two things, one the light holding out and the second being that the local council had not started to rebuild 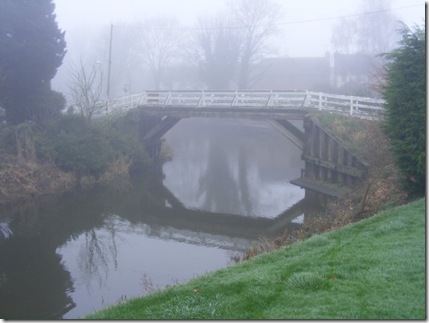 the footbridge across the river. We were lucky on both counts, no sign of any work on the bridge, if there had have been it would have been backwards all the way to the junction, probably an hours run. We passed under the foot bridge and pulled into the moorings at five to four, the sun had gone to bed but it was still light.

Posted by Brian and Diana on NB Harnser http://nbharnser.blogspot.com at 16:55