The wind died away overnight , but this morning we woke to sun and rain, not much rain but a bit. We spent the morning at Prickwillow Pump Engine museum, unfortunately it was not a running day, but it only cost us a couple of quid each to get in. You will find the engine running dates here. I was pleased to see they have done some work on their old Drag Line, hopefully enough to stop it deteriorating until they can restore it. They also have another engine and pump to rebuild and house somewhere.

By the time we left the museum the wind had freshened and the sun gone on its holiday, to top it all it keeps raining, only short showers but heavy with big rain drops.

We waited until 3 pm and the rain had stopped, but within seconds of letting go it started again, thankfully not to hard and only lasted about 20 minutes. That was the last rain we had for the rest of the trip. Although it wasn’t raining on us we could see the rain around us. 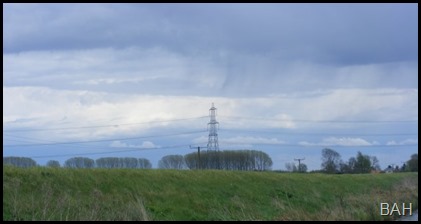 There were a lot moor boats about including three Fox Narrowboats who had crossed from Salter's lode, 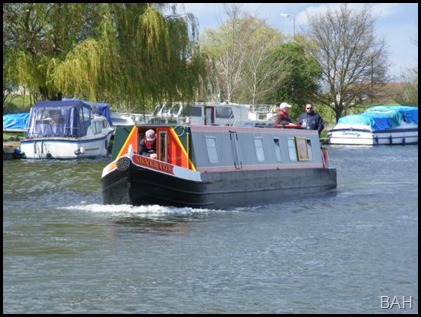 they were probably heading to Ely for the night, but being late in the day on a Bank holiday weekend I don’t know what luck they would have. We have probably seen more boats on the move today than we have since last October when we left the canal system. Most of the moorings were full in Little Port and like wise the EA moorings at The ship.

Arriving at the junction with the Little Ouse I spun Harnser round and slowly but steadily reversed back up the Little Ouse to our moorings. Cruisers moored on both banks certainly help the concentration when doing this. We tied up at quarter past five on our home mooring for the night. This is not the end of our travels so watch this space.