Wall to wall sunshine, temperatures in the top 20s there is only one place to be, on the river.

We arrived at the boat at 1230 and were planning to bring the boat to the A10 bridge as normal to load up, however there was a cruiser moored there so on to plan B. Diana took the car down to the dry dock/diesel quay and I went to move Harnser.
The first thing I did was to check the plumbing we did the other day, bad news the cylinder was wet around the fitting, not really surprising and I tightened the nut another 3 flats.

I then reversed Harnser up to the diesel quay, its much easier going upstream but I still managed to meet a Narrowboat on one of the bends but it went OK.

We were soon on our way but only out onto the Gt. Ouse and round to Brandon Creek EA moorings for lunch.

By now the slight breeze had died away and as we set off upstream it was getting warmer. We met a very nice wooden cruiser, we have seen this in the area several times now. 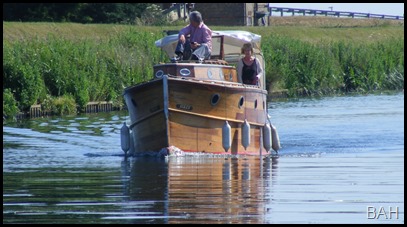 The approaches to Ely were again packed with geese and the resident Barnacle goose was still in with all his Canada mates. 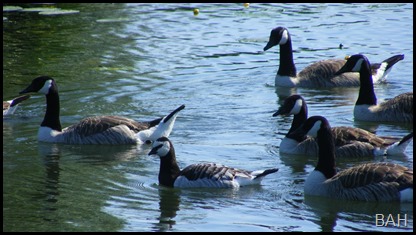 Just before we entered the town a local train came by with some nice local scenes on her side.

Ely looked empty, loads of vacant moorings, then the reason became obvious, the fair is in town and very sensibly the council have closed the adjacent moorings. 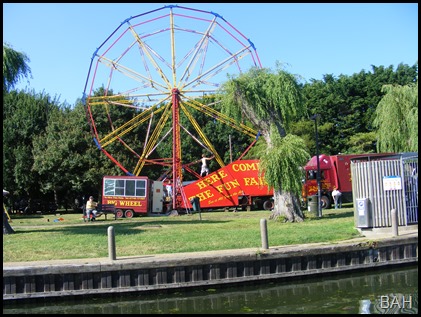 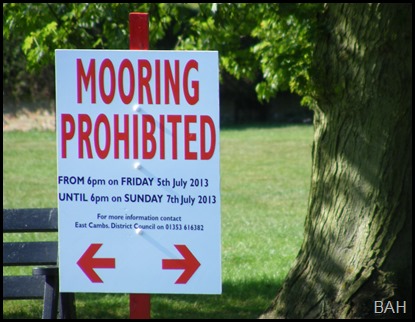 We have seen several pairs of Grebes who are still mating and building new nests, there were a couple of males taking gifts to their better halves who were titivating their nests. If there were prizes for bulk this chap would have been in the running. 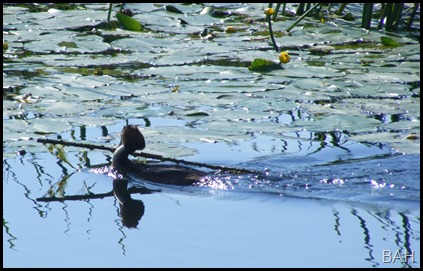 This was rapidly followed followed by a duck enjoying a pleasant bath in the sunshine. 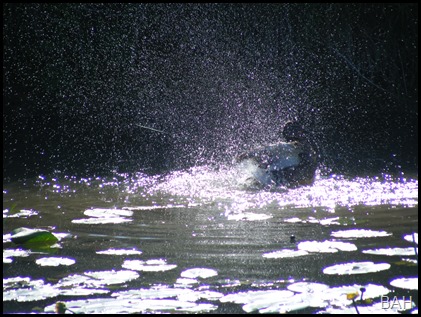 By now we were well clear of the town when we met quite a convoy of wide and  narrow beamed vessels, the first called out, “hello Harnser” there was no name on the boat but I am fairly sure it was Pippin from the Cam.The others all looked as if they have been to a wedding.

There were a couple of spaces big enough for us on the Little Thetford EA moorings so we decided to stop here for the night.

We spent July 4th on the water, beautiful weather. When you love boating and being on the water, well, it's the only place to be on a lovely summer day. I love your photos, come visit and see our water photos.
Have a wonderful weekend,
Connie :)

Nice to see you! Sorry we engrossed in tennis. Want to ask you advice. If we only have time for one river which should it be. We thinking Lark but open to advice. Coming back next year and may not leave!!!

'If we only have time for one river which should it be. We thinking Lark but open to advice'

I wouldn't do the Lark beyond Prickwillow; it is desperately dull for most of the rest and with no moorings. However both the Wissey and Brandon Creek (Little Ouse) are well worth cruising.

I think the Lark above Isleham Lock is the best bit of the river, but you do have the well engineered bit from Prickwillow to the lock.

The Little Ouse has one lot of GOBA moorings about half way up it and then moorings at Brandon. If your boat is short enough you can lock up and pass through the town. Last time we went there was a tree blocking the river about a mile upstream from the lock.

The Wissey has moorings about a mile from the junction, more at Hilgay and then GOBA moorings at the caravan park at Whittington, but these we found very noisy as they are almost under the road bridge.