Yesterday evening was mainly showery but I did manage to spot one meteor in a break in the clouds between showers. Overnight it absolutely chucked it down  and today it has rained all day.
If we had a CO alarm in the Back Cabin I am sure it would have gone off early this morning as the fumes from the boat behind’s stove came in through the vents.

We set off in light drizzle at 10 this morning but it soon changed to proper rain and needless to say we have not seen many boats on the move today. Just before Napton Narrowboats there was sight you don’t often see on the Oxford canal, a wide beamed 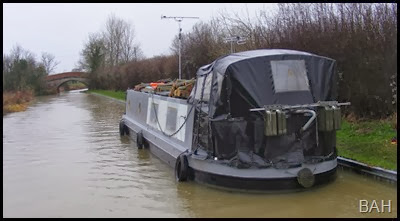 boat. I don’t know if he would be able to get through the next bridge to get to the winding point or need to back up to the marina to turn.

The water level was well up with lots of water draining off the fields, so much so that the towing path was well under water at 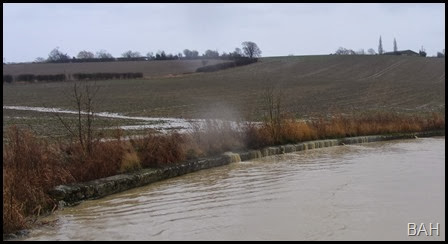 Wigrams,(sorry about the wet on the camera lens) its all ways a bit damp there but today it was under water. It is surprising how much difference that extra couple of inches of water makes to the way the boat travels. 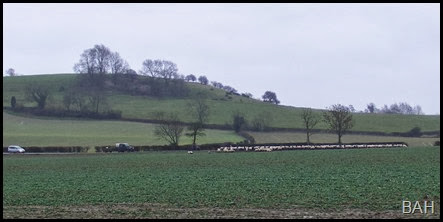 We could see in the distance a farmer trying to move his sheep but they seamed more interested on coming onto the rape field than going where he wanted them to.

As we approached Braunston there is yet another sad sight  with a wooden working boat on the bottom.

This is the same spot that one was lost about 5 years ago which took 2 years to remove from the canal in pieces, lets hope they can refloat this one without further damage.

At Braunston Turn we headed to the left on the North Oxford Canal stopping just past the junction to fill with water, the area around the taps was under an inch of water so I was glad my boots really are waterproof, they are Panama Jack’s, not cheep but waterproof with very good non slip soles.

Once the tank was full we were off again. Just beyond bridge 90 there is an off side tree down part way across the cut. There is room to get passed it but its bit of a wiggle due to the moored boats ether side of it. It is on the CaRT stoppage list and should have been removed by lunch time today, it looks as if one branch may have been removed but I suspect they will ether need a work boat or a tractor in the field to clear the navigation properly.

We continued northwards for about an hour finally mooring for the night at Onley just north of bridge 81 at 1330hrs.
It was quite a step down from the deck of Harnser to the towing path and the top of the piling is only just above the water level. 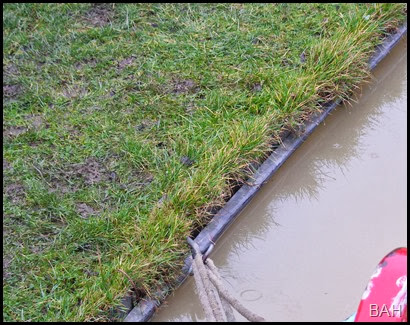 We had been here about an hour when I saw a boat coming round the bend in the rain, I thought it would make a nice photo so snapped in. When it got alongside us I could see in was the ex steam vessel Monarch. 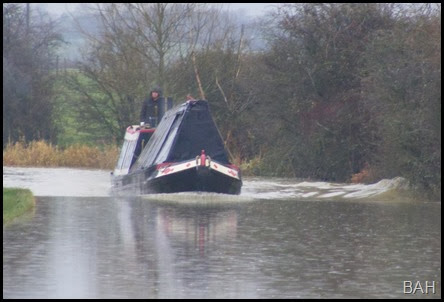 We got to know Monarch when moving Minehaha for Anne to the brokerage. Was really good to be back on the UK canals again and relieved I could remember what to do with a lock!