Boy did it rain last night and then started again almost as soon as we left.

10 am our normal start time and we winded in the flow to head downstream, there was another Narrowboat ahead of us and we followed them passed the weir and pulled in behind him on the 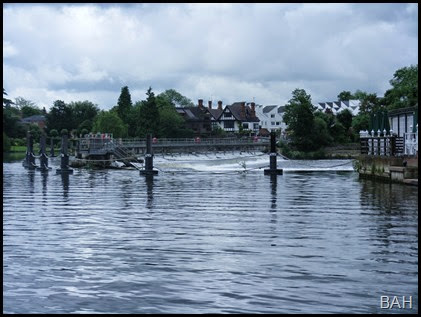 Marlow Lock Lock moorings, while we were waiting for  boats to come up one of the Salter’s boats came passed and stopped on the dolphins. I was expecting the Locky to call him in , but no we both went in. I said to the Salter’s skipper as I passed I expected him to go ahead of us, but he said they had lost their priority.

Leaving the lock we passed the other “Free” moorings in Marlow, there were two boats there but room for another couple of Narrowboats on each end. The kids from the activity centre at Marlow http://www.longridge.org.uk/ were having a great time, the rain didn’t bother them.

Before we reached the next lock the Salter’s boat had not only caught us up but had passed us, however he had to wait for boats coming up in the lock so this time we shared with him as we did at Boulters lock. 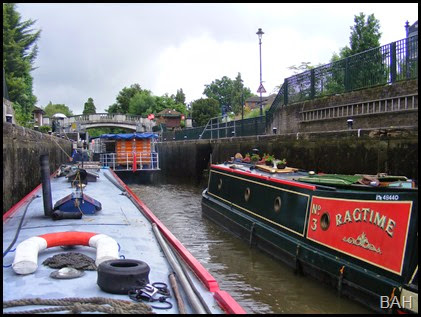 We carried on through the railway bridge in Maidenhead before

winding to fight our way up stream against the flow. There is a plaque in the far side of the bridge saying it was designed by Brunel and has the widest, flattest brick arch ever built. 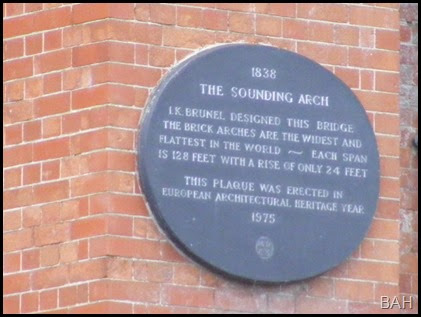 Back at Boulters Lock a hire boat pulled in behind us and went to find out what the Locky was up to, good job they did as he didn’t know we were waiting.

We stopped for a bit of lunch moored to a tree on one of the Cliveden islands, looking straight up the cut Cliveden House  http://www.clivedenhouse.co.uk/ is set nicely in the trees. 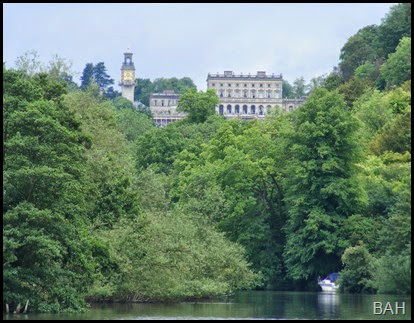 These cormorant were making the most of the posts protecting the weir above the lock.

By now the weather was improving, the rain had stopped and there was a bit of sun about. We passed a house with a strange sphere arrangement in the garden which we guess was some sort of hanging garden seat/summer house. 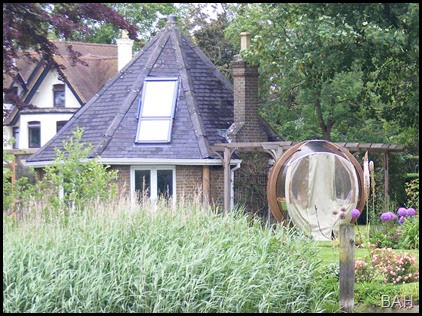 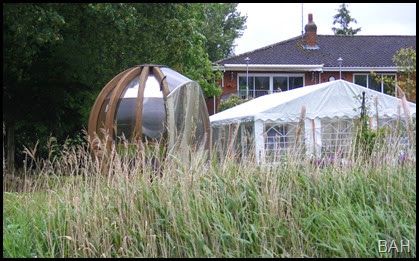 It was interesting to note that with constant engine revs our speed was anywhere between 4 and just over 2 MPH pushing the current, depending on the width and depth of the river.

We decided to try and moor below Marlow lock on the free moorings, when we arrived there were two boats there, one who was there when we passed this morning and one we met on our travels, The landing stage ahead of them was longer than behind so we tucked in there, it is not a very straight piece of piling so our stern is about 5 foot from the bank.

As you will see from the map below we are only moored about half a mile from where we where last night, but it has take us all day and 15 miles to get here. 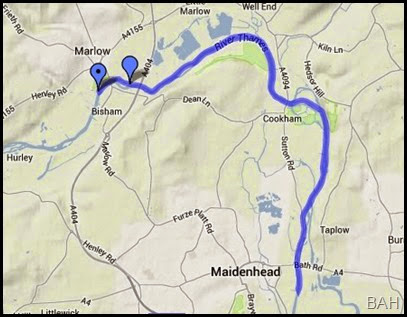