Last night we ate in The Cape of Good Hope, very convenient as our front deck was about 3 yards from their front door. When we went in the place was heaving, no vacant tables, but a pair of boaters kindly invited us to share there table. When we ordered the food we were warned there would be about a 50 minute wait and they were spot on. The food was very good, even better than last time we visited and they had 6 beers on the pumps, the only down side was football on the telly and when it started they turned the sound up even though no one in the back room was watching, so after finishing our meal we went back to the boat. By now the area outside the pub was full of cyclists drinking. By 11pm it was all quite and we crept off to bed.

This morning there were several boats going down the locks and just after 10 am. we moved across the cut to top up with water. A lady wondered round and told me she follows my blog so I hope she had a pleasant run back up to Stockton. Nearly all the boats that had been moored here last night had left so it looked as if we would be doing Hatton alone, but as we left the water point a hire boat was coming up the locks and they caught us up at Hatton bottom lock so were able to share. They had 3 strong fit men onboard so with Diana working ahead we made good progress. It turned out they were carers for a disabled gentleman they had onboard. We only encountered one obstacle on the flight and that was this barge that had been moored about 60 foot from the lock mouth. 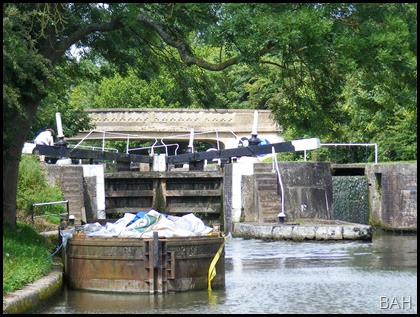 There is a nice bit of graffiti on the bridge above the lock, if graffiti can ever be nice. 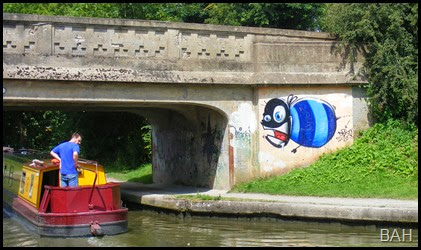 Just after this we started to meet boats coming down which eased thing a bit. CaRT are repairing the offside of one of the lock and here we encounter the volunteer locky who was on lock 10 at Napton when we came down. We asked how he got on with the butty going up and it turned out it was stuck in lock 9 for about 2 hours with the owner getting quite abusive to people with very strong language.  It seemed that he had only just bought the old butty and was told it was only 6’9” wide. He also got stuck in several other locks and friends of ours who were following took 5 hours to do the Napton flight.

Once we reached the Hatton Workshops the locks were once again against us but it didn’t cause a hold up working ahead. We said goodbye to our new friends at the top lock and sent them on their way, they have to be back at Alverchurch by Friday morning, some 18 miles and 20 locks in a day and a half so they should do it OK. We continued on for about a mile and moored for the rest of the day and night just below Hatton Station in the sun at 2pm.