As planed,last night we ate in The New Inn at Buckby Top Lock http://www.gillies-inns.com/ and we weren't disappointed, they had a good range of beers on and we were offered a taste of one we had not tried before without asking, there were several specials on the board including chili beef with chocolate. The pub also offers free WiFi  which I didn't know about before we went so didn't take the laptop. To top it all they had a raging fire going that opens into two rooms. We will visit again sometime.
This morning we woke to the sound of next doors diesel heater doing an impression of Heathrow at about half seven, we were moored stern to stern and we sleep in the Boatman's Cabin. We took the dog for a walk in the very warn sunshine, probably the warmest day this month.
We wandered down to Norton Junction and over 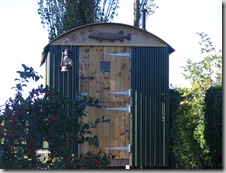 the food bridge, on the off side you can still see the iron work in the ground from when this use to be a swing bridge. The small cottage on the corner at one time was connected with the Salvation Army. They now have a very nice living wagon in their garden.
Once back on the boat it was a case of reversing back to the junction and then heading off down towards Braunston. We met one boat in the tunnel called Pin Mill which is a place in Suffolk, needles to say the steerer came from Suffolk as did the original owner. As we approached the top lock a boat was just leaving which was handy,also I knew a boat was following us through the tunnel so I tucked into the lock and waited for "nb.Tranquility" to join us. We had to turn all the locks except one as there was a boat running down ahead of us, the water levels in the lock pounds were the best I have seen them for some time with them all on weir.
We stopped for a bite of lunch in Braunston and also to visit both Bottom Lock and Midland Chandlers, I still didn't get what I wanted.
We set our goal for this evening as The Bridge Inn at Napton, but as we approached it we could see the moorings were somewhat busy with 13 Narrowboats moored before the bridge and one after with a second arriving as we passed. The sight of this lead to a change of plans and to eat onboard, the next decent piece of mooring is just passed the old brick yard where we finally moored for the night at 5-30 pm overlooked by the windmill.