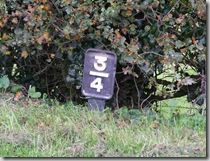 about the cast iron 1/4 1/2 3/4 posts and they assured me they were originally placed every quarter of a mile along the canal with a mile post every mile. These replaced the trees that were originally planted every half mile, alternating between Elm and Willow. In those days unlike today, there were no other trees along the line of the cut. This morning I received a very interesting comment that these markers were also used on the Stratford canal (Added to the bottom of this posting)

Last night while walking the dog at 1030 the Canal Boatclub boat moored a few boats down finally shut their engine down.
This morning we set off at 10 am. reversing along to the lift junction and winding to head down the Foxton flight. The lock keeper was in the old lock cottage and said we could carry on, there was no one using the flight. At the bottom of the flight we turned right, Diana had walked behind the pub to open the swing bridge, it was just as well she did, because moored on the moorings reserved for bridge operation was yet another Canal Boatclub boat. The next swing bridge which has been a pain to operate for some time is undergoing repair by May Gurney and they have lifted off the bridge and were chopping away at the foundations on the off side, lets hope the repairs take some time and when complete are very successful.
Just beyond the bridge I was passing the long term moorings at tickover when a fish, somewhere between 6 and 8 inches long torpedoed out from the off side bank, breaking the surface several times and swam straight into the side of the boat with a very audible thump, it obviously didn't stun its self as it didn't float to the surface. I have never experienced a fish strike before.
We continued on to the end of the arm and winded in the basin before mooring on the visitor moorings just outside the basin entrance. These visitor moorings are quite unusual as there is a water point every 150 feet so it is easy to water up while moored for the night. Again quite a short day as we were tied up and finished by about 1-30 pm. I am not sure what we will do tomorrow as the stoppage is not due to be lifted until 5 pm. so the best we can hope for is to get to the bottom of the Foxton flight and maybe eat in The Locks pub.

Mile posts on the Stratford
The Stratford canal has ¼ and ¾ posts along its route. I have never checked that they are all still there but the majority seems to be. They are very easily missed as they are just rusting upright pieces of rail in the hedge – perhaps put in during Great Western Railway ownership days. When SONCS installed mileposts as a millennium project the location markers were there but BW still used a wheeled ground measure to confirm the distance from
Kings Norton junction to get them checked. Unfortunately the man doing it must have nipped off to the pub one lunchtime en route so he ‘resumed’ one ¼ mile out of synch. SONACS then installed to his plan. Then a SONACS member spotted the error so BW came along and had to relocate 10 11 and 12 as I recall a further ¼ towards Stratford. [the midpoint 12.5 mile was known] BW did this by wrapping chain around them and simply lifting out of the ground by crane with concrete surround attached. Hence the fact the beautiful paint was scratched and they now need a major repaint exercise.  There should be 26 mileposts in total over the 25 mile length to Stratford as there is an additional 12 ½ mile marker at the midpoint by Kingswood junction beside lock 21 outside the old BW offices (former Stratford Canal Company carpenter’s shop and as used by David Hutchings during the
restoration). However, the 2 mile marker would be in the tunnel so it was never installed and before you ask the wheel measure was not taken through the tunnel along its wall to measure it so far as I am aware.
Clive H