We made a late start this morning not getting away until 11 am. The first bit of interest was meeting a boat just before Crick Tunnel who hailed me for assistance. He had only bought the boat 15 minutes earlier at Crick and now it wouldn't go, could I help. The reason it wouldn't go was because it was hard aground about 3 foot from the off side. I went aboard and tried to pole the front out but it was solid, so I snatched him off backwards into deeper water but it was only second before he was back where in the mud, so I snatched him back a second time, this time pulling him well to the middle. He said the boat yard had not told him he might run aground, when I left him he was on the end of the pole yet again.
Diana steered through the tunnel which started very dry and 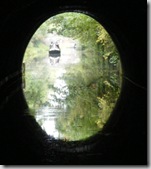 ended wet at the Crick end, we didn't meet any boats but as we emerged from the tunnel a boat was holding back waiting for us before going in.
The moorings by the tunnel were packed solid as the moorings opposite Crick Marina are now winter permits only and had 3 boats moored on them. They seam to be administered by Crick Marina so I don't know if they hire them from BW of letting them on BW's behalf. I do know that the best moorings in Crick are closed to visitors from 1 Oct onwards.
The new marina at Yelvertoft looks quite full, they have big signs advertising diesel with a large price display, unfortunately they have forgotten to write on them so I don't know the cost of their diesel and I wont sail in to find out. We stopped to fill with water by the bridge in Yelvertoft, its the first time I have stopped here and its quite a fast tap.
We continued on our way seeing a couple of Kingfishers, these were the first we have seen this trip and I would have expected to see a few more on this route, we normally see 2 or 3 before Watford locks and more on to days section, I expect the hard winter must have given them quite a hammering, maybe things will pick up next summer.
When we arrived at the Junction there were several boats moored to the rings but they all had one or two unused rings between them so we have ended mooring with our stakes. Prior to mooring I winded in the Welford arm, not because we are heading back but because I wanted to touch in a couple of scratches on the right hand side. We will wind again in the morning before continuing to Foxton.

The boat yard probably thought he'd been on a boat before...

When we're out in the winter, I take the view that if there's no-one on the designated winter moorings, there's nothing to stop us stopping for the night. This is particularly true if there's a huge length with no boats, as is often the case at Crick.