Big locks and a Tunnel

We set off alone at 10 am. The pound had dropped between 10 and 12 cm overnight, that’s a lot of water on a pound that length. We had just passed The Two boats when we spied a boat ahead just pulling into the lock moorings and him and Diana went and drew the lock, needless to say as soon as it was empty a boat appeared above it to come down, still it saved closing the gates. Surprise surprise, the next lock was full; the boat ahead must have been moored in that pound overnight.
We stopped for water opposite The Blue Lias, I don’t remember there being such good pressure on that tap before, the other boat went on alone, but didn’t get far ahead as the flight was against them and when they saw us coming they waited in the third lock up. As we caught up the wife went on to set the next lock, Diana closed up behind us and we carried on like this all the way up the flight.
As we were working up I thought, wouldn’t it be good to meet a hotel pair now. We were just closing the top gates when Snipe and Taurus came into view. Why hadn’t they been an hour earlier.
A couple of days earlier Snipe had been moored just behind us, it was the same colour as this Snipe but it wasn’t the same boat, it must have been her predecessor which could lead to some confusion.
We both arrived at Calcutt bottom together just as a boat was exiting which was handy, then there were a pair coming down in the second lock and Diana when ahead to open the gates on the empty top lock. As we locked up the second lock a boat pulled out from Calcutt online moorings but he had the good manners not to go into the lock that Diana had opened up, but he didn’t lose much as there were 4 boats coming down.
We pushed on alone as the other boat stopped off to Wigrams Turn where we turned sharp left towards Braunston. 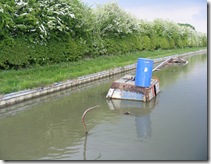 The sunken boat on the puddle bank is still there, but now is sitting alone with just a big blue drum sitting on the cabin top so you can see where it is.

I pulled over by the Stop House to drop Diana off to dump the rubbish and walk ahead with her windlass to set the bottom Braunston lock read for me, luckily just as I entered the lock I looked back to see a boat in the distance so while I waited in the lock Diana got the ice creams in. I knew there wasn’t anyone following us and this boat had pulled out of the marina after we passed.
We didn’t meet anything in the flight and had to turn every lock, we were working well but even so there was a Canal Club boat chasing up behind us with someone setting ahead.
We entered the tunnel alone and I could just see the boat ahead silhouetted in the far portal, then I spotted a headlight in the distance, we had reached the bendy bit before our paths crossed and they were sitting against the side not moving. By now I could hear the roar of the Canal Club boat behind us, it sounded flat out and doing at least 6 MPH considering how quickly they also passed the oncoming boat. As we left the tunnel the noise from their engine was just something else and it was not long before they caught us up with a fair wash.
From here to Norton Junction there were several moored boats and boats trying to moor on what looks a good edge but is very shallow, the Canal Club boat hanging on my rudder, I did wonder if he was going to try passing between the bridges as I slowed for the moored boats and boats on the wrong side of the cut, but he didn’t. At Norton Junction he turned left and we right, looking for a space to moor but were out of luck, so we backed up to the junction, through the bridge towards Braunston and moored on the rings just prior to bridge 10. As I turned at the junction I could see the Canal Club boat who was now travelling quite sedately.