We woke to a nice morning, the Hotel Pair came by at about 9 15, there had been boats going the other way but nothing else in our direction. We set off about 10 am just as the rain started. Diana and the dog were walking but Magic soon went off that idea, he tells you he has had enough by getting hold of his lead and heading back home or to the boat, so I had to pull over and pick them up.

As we approached Northbrook lock there was a boat locking down. They told us how low the next pound was, it was down by a good foot and even in the middle I was bouncing on things in the first section. At Dashwood Lock the hotel pair were struggling, they had boats coming down so they had to leave the butty on the lock moorings which went had aground while the motor entered the lock, it was not helped by them having a brand new crew who had only joined them the day before so the skipper was having to tell them all what to do. I think we must have been there for at least three quarters of an hour or more, time to photograph another three plane going over. 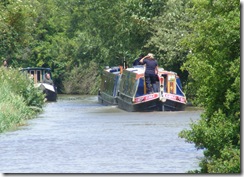 There were a steady stream of boats coming down and 3 waiting at the top. I dropped Diana off at the beginning of the lock mooring but I was unable to get anywhere near the side as it was far to shallow. We all made good progress after this with the rest of the pounds well up to weir. The hotel Pair pulled over for lunch by the Somerton Common which left us free to continue. The house on the off side has a rather smart summer house /tent. They have it out most years and they have a great view down the canal from it.

We stopped to fill with water at Aynho Wharf and while we were there I took the opportunity to fill up with diesel at 86p and self declaration. After filling both tanks we pulled over to the visitor mooring and I walked round to the Railway Tavern to book a table for this evenings meal, unfortunately the only time they could offer was 6 pm. much earlier than we like to eat so it was dinner on-board. As it was only 3 30 pm we decided to push on for a bit longer, finally stopping just below King Suttons lock for the night at 1730.
We were expecting the Hotel pair to pass us as they were planning to moor overnight at Twyford Bridge but so far there has been no sign of them and it getting dark.