The weather didn’t improve much yesterday and was still blowing when we went to bed. This morning was much better, the rain had stopped and the wind dropped and shifted round a bit.

We set off about 10.15 AM at a steady pace upstream, we didn’t share any locks and only met a few boats during the morning. We pulled over for lunch about half a mile below Newbridge for an hour or so before continuing up stream.
We met a few more boats this afternoon, three of which were hire cruisers all with lady drivers but we met more narrow boats and also had a couple following us.
As we approached one bend I spotted a cruiser coming towards us and held back, then I spotted a Narrowboat bow coming round the bend with the cruiser overtaking him. If I had continued at my original pace he would have been on the deck by my garden bench now.

We spotted a white Egret feeding in the shallows on one bend, these are getting more common now, but its mainly been an afternoon of aircraft spotting.

At one point we passed a strange craft moored with a few other boats and what looked like a small funfair in the field.
What caught my eye was 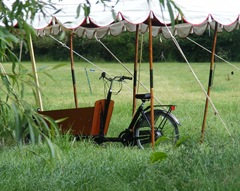 the bike, these are very common in Holland but I spotted one just like this as we came through Thrupp and as we are not a million miles away by road it could well be the same one.

We decided to moor at Tadpole Bridge for the night and eat in The Trout. There was already one Narrowboat on their moorings but we managed to squeeze in behind them, just.

PS. I see from Twitter that the boat is still aground by Oxford Common and has now been joined by a second one.

Those planes look a bit military. If this was Greece you'd have been arrested by now.

nice to see you both today. hope the weather stays good for you.