The first job this morning was to help two single hander boaters up the flight. We set off just after 8am and helped them right to the top. It was slower than our 38 minutes yesterday as we had a boater coming down in the latter stage and we were back setting for the boat behind.

We bid them goodbye and walked back down the flight to get read to leave ourselves. We had to wait while Graham winded and a single boat went up ahead of us.
We left at 10am and in the first lock breasted the boats up so we had a crew of 3 working the locks but again we were held up, this time by the boat ahead. Bob and Neil followed us up and we back set for the as we went.

At the top of the flight Graham pulled over to walk back down the flight and assist another pair of boats up so we chugged on alone. We arrived at the bottom of the Calcutt flight just as one of the Navy boats was leaving. We pull into the lock and waited for a boat that I had seen leave Ventnor Farm marina. By the time he arrived there was a boat waiting to come down, the same happened at the top lock. The other thing that happened was at the bottom lock the sky opened and it chucked it down, by the top it had stopped.

There was a boat moored in the flight that we had seen at the bottom of Watford Locks, I think its used to bring in broken down boats as a push tug.

At the top of the locks we pulled over for water while boats continued going down the locks, I spotted that there was a boat coming up but the previous boater had closed the bottom gates so I nipped over and drew the paddle to lift them. It turned out to be Neil who had followed us up Stockton Locks, so we saw him on our way before setting off our selves.

Up to Wigrams Turn in the hail storm and left along the GU to Braunston. At Braunston Turn it was left again, just as Neil left Midland Chandlers. We followed him at a good distance along the North Oxford meeting several boats coming the other way. The bridges that WRG rebuilt have weathered in very well. 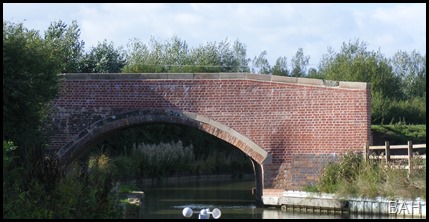 The new marina at Barby is starting to fill  up now, there is still some way to go but there are lots more boat than last time we were this way.

This boat rather impressed me, why would you want an emergency potter? 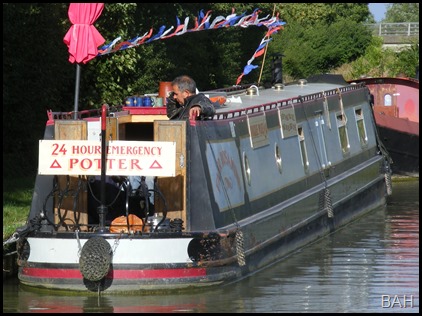 At the Hillmorton Locks we caught up with Neil in the last pound and we locked down in adjoining locks. As it was now 6 PM we had set off at 10am we moored shortly afterwards on the visitor moorings by the water point but  Neil pushed on further.