There were boats arriving at the moorings last night well after dark and this morning someone had a hammock hung between two of the trees in the pub garden, but by the time we were up they had all gone, just another Narrowboat there.

The boat behind us set off at 9 15am this morning so we joined them and have moored together at Irthlingborough for the night.
In the passed we have seen lots of Buzzards and Kites around here, today it was just Wadenhoe Church on the hill. 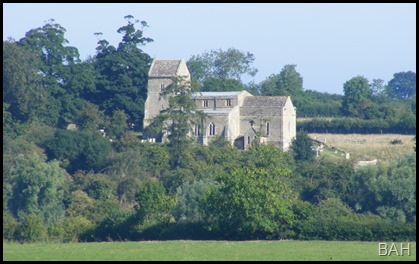 The first boat we met on the move was above Islip Lock so that was one we didn’t have to turn, the only other was Irthlingborough Lock where a boat was also waiting to go down.
There was loads of head room under the notorious Islip footbridge 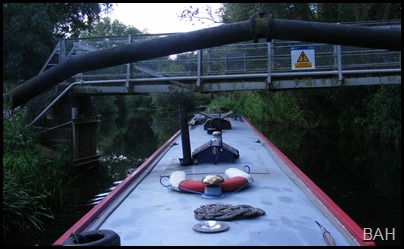 below the lock. Its not a problem going uphill as if you can’t get under it you can moor at the sailing club and wait for the levels to drop. If you are coming down and have dropped through Islip lock then there is nowhere to go and the best thing to do is go back up the lock backwards, but remember the river is in flood while you are trying to do this.

We may not have seen Kites and Buzzards earlier but we saw some squabbling further upstream, it seems they don’t like each others company. 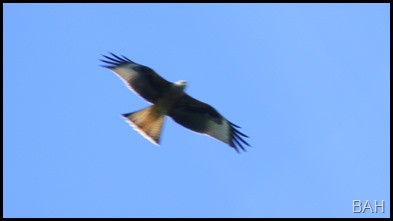 The swans are well into their moult getting rid of all last years feathers before the winter comes. 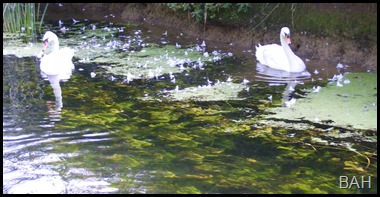 As we approach Doddington lock we thought our luck was in, this is a non electrified lock so when you leave the lock you have to raise the gate by hand, I thought I saw a boat coming down the river towards us, I did but it wasn’t going through the lock, it was the EA weed cutter work in the reach above. 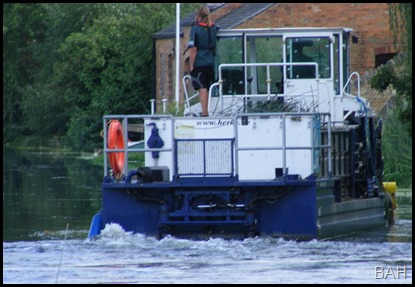 Thrapston bridge was nicely lit as we came through so I took a photo of our cruising companions following us up the river.

There is a new marina planned for Thrapston where mooring plots are for sale, there is no sign of any work starting yet and the site is still like it was 4 years ago. The plots start at £35K each. 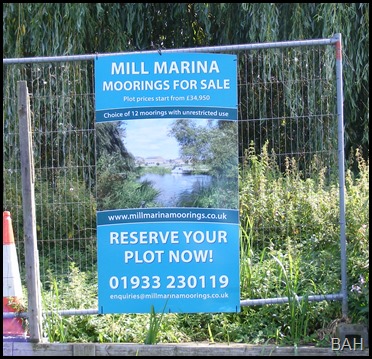 Our next encounter with moving boats was a Lower Ringstead where we had to wait while two Narrowboats locked down, so that didn’t help us at all and the next two certainly didn’t. We were on the approach to Irthlingborough lock when two boats came round a blind bend on the wrong side breasted together with only one engine running. I got hard over to the right and missed them but then for some reason the steerer of the boat doing the work went hard aster and slewed over forcing me into the reeds and collecting a blade of rubbish. There was loads of space before the boat following came along and if   they had just continued straight I would have gone round them and the boat behind would have passed easily. Once up through Irthlingborough lock we moored for the night by the old Diamonds football ground.