We actually arrived at the boat yesterday afternoon as I had the toilet to rebuild before we could go anywhere. The job went well and I even got it straight when I refitted it, better than last time I had it in bits. Yesterday evening we decided to try the pub in King’s Bromley again, last time we went it was curry night, but the curry was off, it turns out Friday is steak night, 2 steaks with chip, peas, mushrooms and tomato with a bottle of wine for £24. We took our table and listen to another couple trying to order, the waitress said “sorry its off” 3 times before they managed to order, so I wasn’t hopeful. When she came to us I asked if the steak deal was on, but she didn’t know so had to go to find out, yes it was on she said when she came back, so that is what we had. When it arrived we were very pleasantly surprised. It was all lovely, we both had nice pieces of meat, fluffy chips, all hot, I couldn’t fault it, the wine was pleasant as well, so a good result.

This morning I did a bit of internetting looking for a birthday present for No.1 grandson planning to go to Lichfield to buy it, but drew a blank, so at quarter to twelve we set off, leaving King’s Bromley Marina for the last time, we have been here 2 years so its time to move on.I felt a bit sad waving to them at the office as we passed, its been a good mooring.

Out on the canal we turned right heading for Wood End Lock. At 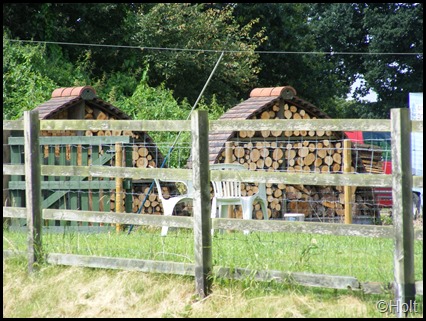 Bromley Wharf the owner has a couple of rather smart wood stores ready for the winter.
CRT have repaired the ground paddle at Wood End Lock since we were last here but it doesn’t fill much faster. There was one boat waiting to go down when we arrived and one coming up, but we heard tails of woo from the boats we met and by the time we locked down there were three waiting to come up. We arrived at Shade House lock with its Volocky just as the boat ahead was about to go in and at Middle lock we went straight in as a boat came out so not too bad at all.

Walking up the flight was this chap and his inflatable canoe, we think he was heading for Gloucester. 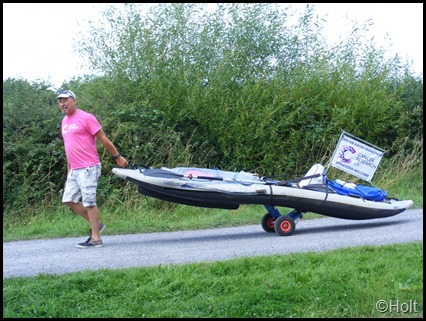 At Fradley Junction we turned right onto the Coventry Canal and stopped at the second water point. In all the time we were there not a single boat came in ether direction. Tank full we pushed off and after about a mile we started meeting boat quite regularly,  one of them was Kelpie with our friends Ian and Ann on board, A very short chat before they were away and another boat was coming. I have only spotted two boundary posts on this canal, 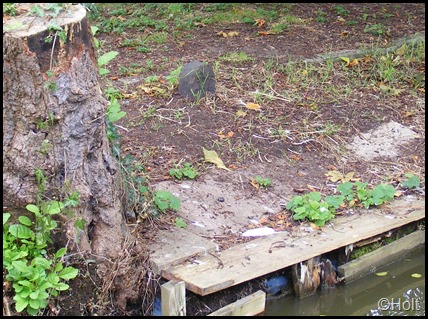 they indicate how much of the off side bank the canal company owned and shows the houses down own to the waters edge.

We carried on to one of our favourite moorings at Whittington, just by the boundary marker between the Coventry and the Birmingham and Fazeley Canal. As we were approaching there was another boat moored in the area and while we were mooring several boats came by going north but only one going south, I do wonder how this chap could see where he was going over his flowers. 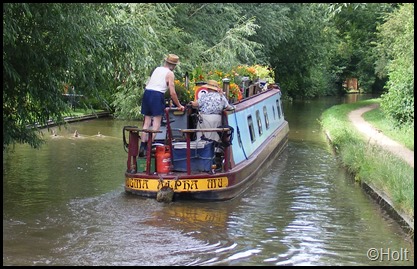 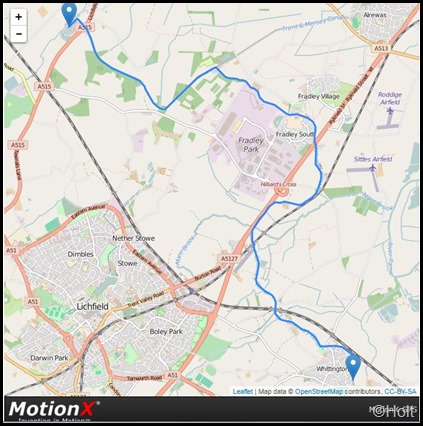 Posted by Brian and Diana on NB Harnser http://nbharnser.blogspot.com at 17:54