Well we finally got away but not everything went smoothly and it still isn’t. To start with my phone wouldn’t talk to Tom Tom, I played for ages before using Diana’s phone which chatted straight away, the problem with this is she is on PATG and I have a data plan. I was about to reverse off the drive when she said “Have you got your computer and the Ipad?” No. So unlock the house and go and fetch it. Right we are off. Once on the A14 we were away, this must be one of the all time best traffic improvement systems. Things went well until the M6 when we hit torrential rain, everything down to about 30MPH. When we arrived at the boat it was bright sunshine, we even managed to park the car by the boat, a first. Everything unloaded and we had lunch, so it decided it would rain again. Once it stopped we dropped the ropes, but we didn’t get far, less than 10 feet and we came to a standstill, down the weed hatch and removed a small blanket from the prop, try again and we get about half a boats length, this time it stopped the propeller turning. I just managed to hook the end of the pontoon with my boat hook. This time it was a large lump of rubber sheeting, about 2.5 mm thick. With the aid of a Stanley knife it was removed in three bits, thankfully the water is still nice and warm. 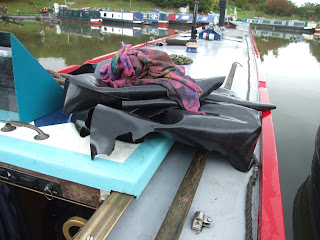 So 25 minutes latter and we are off, turning left out of the marina and heading towards Glascote Locks. As we arrive a boat was about to come out of the top lock towards us, even better there was one below waiting to come in. By the time we reached the bottom lock there was a third boat coming up so when he left we were straight into that one as well. We pulled in at Fazeley to take on water but found that even after running it for several minutes it was still quite warm, so we gave that one a miss, moving forwards a few meters onto the visitor moorings.
To cap it all this is the second time I have written all this as Google wont let me sign on to Open Live Writer and I lost it all 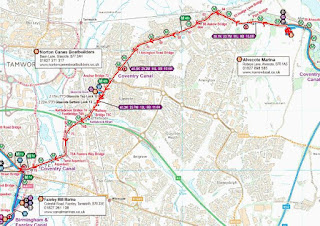 Brian I just wrote a test post in OLW and then published it to Blogger without any issues.
Tom

Brian, I write my blogs on Word to start with and save the file, then copy and paste straight into blogger. I find it much easier than using OLW as the editing in Word is so much better, and if things go wrong you have it saved in Word.
Debby