We woke to a bright sunny morning, even if it was only 13°C inside the boat and outside it had dropped to 4.7° sometime during the night. There were several boats passing in each direction before we set off at about 10 AM. Its some time since we have been this way and what was just a muddy field with holes is now landscaped with houses. 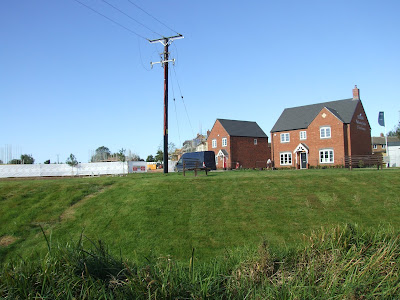 After this we were straight into a fishing match, must say I have never met such a cheerful bunch of anglers, no black looks but friendly hello’s. We struck lucky with Armitage tunnel, we had just cleared the bridge as a boat arrived at the far end, a couple of minutes later he would have been in the narrows and I would have been backing out. Coming into Rugeley there are a couple of houses on the offside that keep birds of prey, today one was out on the lawn sunning its self. 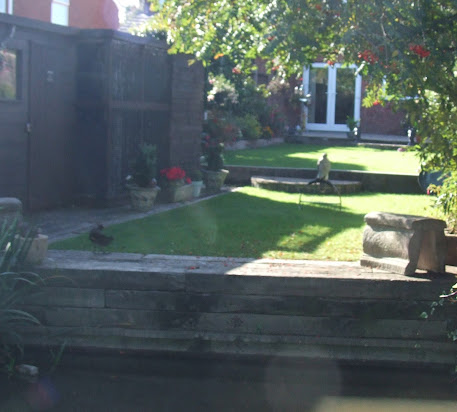 Not a very good snap but the sun was bright.

Every time I have been this way in the past I have photographed a leaning shed, getting worse each time, well now its gone.

We stopped in Rugeley to get some batteries for the clock and torch in Morisons. With the one way checkout queue down one isle I decided to use the self checkout as we only had 2 items, I only had to call the assistant twice to help me.
I then tried to find the very good hardware shop but was unlucky, maybe I have forgotten where it was or maybe its closed down.
Back to the boat and we were on our way. One thing I didn’t expect was all the moored boats north of bridge 67, never seen it like that before. The boat ahead of us stopped to let a day boat come through from the other direction so I had to stop just clear of the bridge and collected the remains of a rope fender round the prop that I had to stop and remove. This house in Rugeley is really going to town with its manikins, 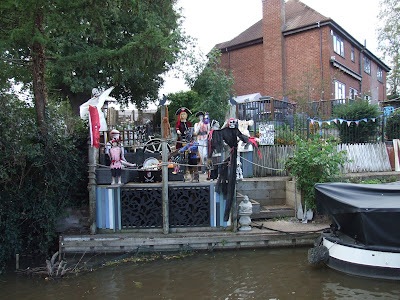 I thing they are in competition with Charity Dock, they even have one on top of their boat. 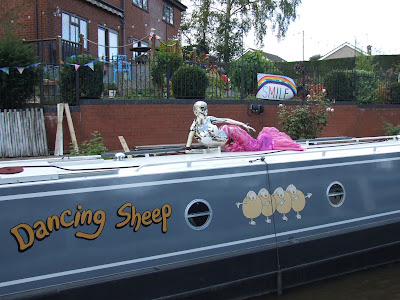 At one time just north of Rugeley at  Taft Bridge there use to be a working boat called Dexta that sold diesel, she is now out of the water and had a full length steel cabin fitted.
At Colwich one of the houses has had a tree stump carved to represent a woodpecker, they have even cut a hole through the top of the stump where its pecking. 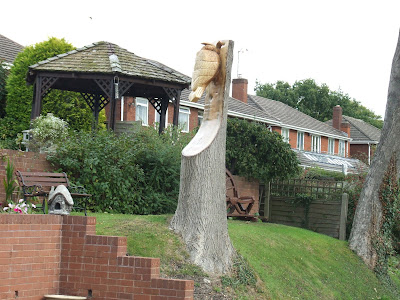 There was one boat going up and one waiting when we arrived at Colwich Lock, The lock is now easier to operate than I ever remember and not that slow. There were plenty of moorings below Gt Hayward lock, even a fender maker working away and selling his wares, but above the lock it was full all the way past the garden centre/farm shop/café. We carried on to Hoo Mill lock where we had to wait for a boat coming down. Above the lock there is a long row of long term moorings and at the very far end of the moorings I spotted these Alpacas or are the Lama? I don’t know. 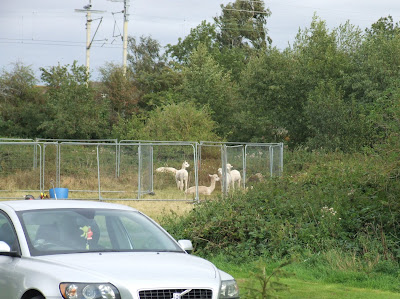 By now it was turning cool and the breeze picking up, not like yesterday where I recorded a gust of 49 Km/h so we started to look for somewhere to moor, both the spots we had in mind were occupied so we carried on up Western Lock and moored opposite Weston Wharf for the night the home of Canal and River Services. 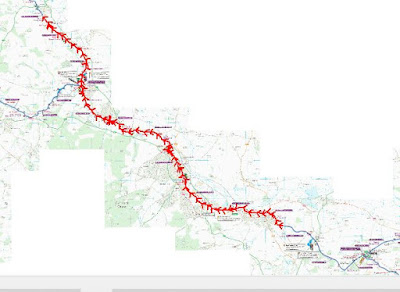