Well as you can se we are away again heading for the Walsall campaign Cruise with the BCNS, As we have time in hand we wont be going the most direct route but probably this ONE as we have to meet them on the 14th. but of course with us that route could change.

We had slight rain on our way here but no holdups, its just on 185 miles so we were onboard just after mid day, After unpacking the car we had lunch before setting off a 2pm. I had to wait while a boat came down the length of the marina to moor in a couple of slots down, but then we were away. The timing worked quite well because we cleared the bridge just before Glascote Locks as a moored boat started his engine, but unfortunately the lock was against us. As we dropped down the first lock a boat came into the second, so that was with us and we could leave the gates open, as we entered the second another boat arrived below so again we departed leaving the gates open. There was a nice little gap on the straight piling right opposite The Three Tuns who are doing a good trade in the garden. 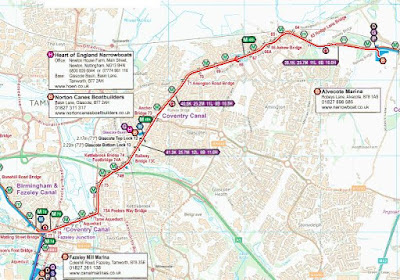