Last night we ate onboard with an Indian takeaway meal for 4 from Rajbari Indian Cuisine and there was more than the four of us could eat and very tasty, luckily the rain had stopped when we went to pick it up.

This morning we were away at 10 am to a fine morning, nothing like the forecast. Our first planned stop was at the water point at Spode, prior to this we did two  impromptu stops, the first at 65a the railway bridge where a group of canoes who as soon as the saw us coming stopped against the towpath, 2 of them right under the bridge, on the bend with a boat also coming the other way. I thanked them for stopping but did suggest that was not the best spot to choose to do it. The second stop and fast reverse was under bridge 62 by  The Ash Tree, where we were half way through the bridge when I saw the bows of the fender boat coming round the bend towards the bridge.
Once filled with water we were off again meeting 5 boats in a convoy, I suspect they had all followed the leader through Armitage tunnel. We had a clear run through the tunnel with no sight of another boat. We started to get a bit of rain as we approached Kings Bromley marina but it didn't get coat worth until nearly at  Woodend Lock, thankfully it didn't last long. There were Volockies on all the locks helping people up and down. We moored at the very end of the Fazeley Moorings on the Coventry Canal for lunch before Diana and the guests walked back to the junction and down to the services and ice cream shop. When they returned we were off again to Hopwas but were rather alarmed at the number of moored boats before the village, if it hadn't been for the git gaps there would have been room for another boat to moor outside the pubs. As luck would have it there was a gap of about 70 foot just through Dixons Bridge. 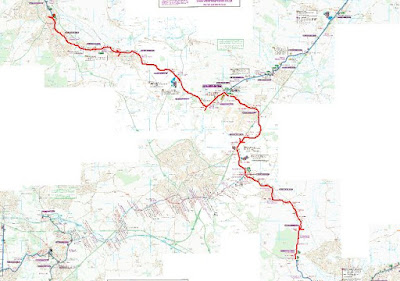