Last nights moorings were very quiet, this morning we planned to move about 10 AM. but first we got talking to a fellow boater who told us how her dog fell over the stern of the boat, got hit by the prop and cost £1500 in vets bills. Following this a couple asked if I was the owner of Harnser and did I "Twitter". It turned out she was Jane Gordon-Cumming the author of "The Haunted Bridge" and other strange tales of the Oxford Canal. which I just happen to be reading at this very moment, I never thought to ask her to sign my copy for me, next time.

We finally pushed off at about 11 AM and soon had two canoes following us all the way to Isis Lock, I got chatting to them as we moved slowly passed the moored boats and it turned out that they live on a boat on the arm beyond the lock, as a parting comment they suggested I tried the arm, you have to reverse out as it only has a 30' winding hole but it has about 160' of 48 hr visitor moorings, so we gave it a go. 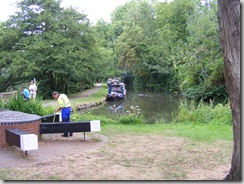 The Very end of the South Oxford Canal

There was one other boat moored up there right in the middle of the moorings but we were able to get in just ahead of him. From here you are right in the city, we spent almost a couple of hours wandering round the streets and alleyways before returning to the boat and  reversing back to Isis Lock.

There is a winding hole above the lock but its only 50' anything longer has to lock down and wind below the lock and then lock back up. By the end of the month British Waterways intend to install a landing stage below the lock as there isn't one there at present. I cant help but thing the shape of the walls below the lock are like that for a reason and wonder what impact a walkway will have on navigation.

Once back up through the lock and heading towards Thrupp again we passed the old Jericho boat yard where BW evicted all the boats a few years ago and sold the site to developers for housing. 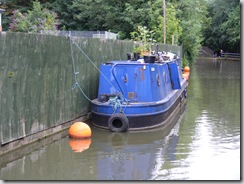 A high wooden fence was erected to stop the boats coming back and "No Mooring" buoys installed to keep the boaters away. 1 boat has returned mooring to the wall and one of the buoys, I wonder how long it will be before he is moved on. I wasn't long before we had a group of canoes catch us up and overtake, 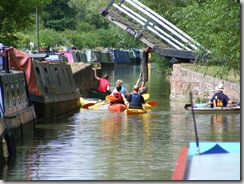 I was passing moored boats! We followed them all the way to The Plough at Wolvercote, where they stopped off.

At Wolvercote lock there was a volunteer working boats through the lock, we never did find out why he was volunteering but thanked him for his help before continuing on our way.

We moored for the night a little after 5 pm on the 7 day moorings at Thrupp, there was just one space, but we could have got in right in front of the Jolly Boatman, but we find the road a bit noisy.