Last night started well, we went for a meal at The Bell, Lower Heyford which was as usual good value and a high standard.We wandered back to the boat and as I had not slept well the night before we decided on an early night.
Just before 2 AM Magic woke and started barking so I put some cloths on and took him out. It was a glorious night, half a moon, dark sky and the stars so bright they looked like lights in the sky. We had only been out a few minuets when I heard the church clock strike two. I brought him in again but he would not settle so I sat in the lounge with him, still he settle, sitting right by me and only laying down while I was touching his head. After a bit he indicated he was hungry so I gave him his breakfast and went to bed to the sound of crunching. The barking started again, he wanted a drink so I went and showed him his water and back to bed, after a bit Diana got up to him and took out again. We were up and down until 6 AM when he finished his breakfast and went to sleep, we just went to sleep. The result of all this was we didn't set off until twenty to twelve this morning.

Just before we left a chap knocked on the side of the boat and asked if he could stand on our boat to fend off a boat being towed backwards to the boatyard for repairs, it was a boat we have seen many times called "Oodunit"  (whodunit). The method of tow could have been better, a long rope from one rear stud, round both rear studs on the towing boat and back to the second rear stud of Oodunit, which resulted in the rope sliding on the towing boat bollards and so towing Oodunit crab wise.

We were away shortly after this and were surprised to encounter queues coming towards us, three at Somerton Deep and another three boats above Nell's Bridge lock and a couple in the pound about to catch them up. 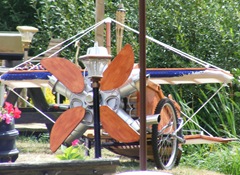 On the way down I spotted a strange machine parked behind one of the boats on the long term mooring at Aynho, so I made a point of taking a photo of it as we passed this time.
(you need to visit the Blog to see it  http://nbharnser.blogspot.com/ ) Also at Aynho I managed to photograph a train crossing the viaduct, something I had been after for some time, shame it wasn't a steam loco.

Water levels were pretty good until we came through Grants Lock where the top gate was leaking very badly and then they were down by a good 6" so we are sitting here moored above bridge 172 with our bum sticking out about 3' into the cut, we arrived here at about 5 30 pm and went right to the end of the piling which was lucky because as I walked back later I saw a wasps nest in the grass by the piling about half way to the bridge. 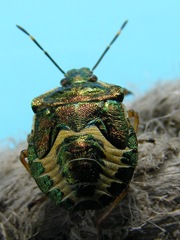 Just before we moored up we had a visit from this little iridescent green chap who I photographed sitting on our stern rope.