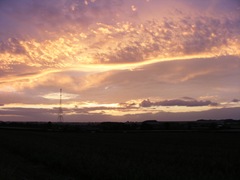 Last night we were treated to a wonderful  sunset with clouds red in every direction, not just in the western sky. I took a few few photos but they don't really give it full Justice.
The strange thing is there are no navigation lights on the mast at all.
About 10 pm we took Magic out for his last walk, by now it was pitch dark, but in the distance I could hear the thump of an engine and a bright light could be seen across the fields in the Braunston direction, eventually an old working boat came under the ladder bridge, it was Mike on Victoria. As he passed the row of moored boats the engine beat dropped back to a gentle tick over, but once passed the beat picked up again to a strong throb heading off into the night.

This morning there were boats everywhere, I don't know where they came from as we saw very few yesterday, we set off about

10 AM and after negotiating the big bend by the farm we came across a sheep who had just swam across the canal and climbed out on the towing path, given a quick shake and commenced feeding on the hedgerow. As we approached the end of the field she had just left I spotted a tractor working in the field behind them, as luck would have it the bank was piled so I pulled over and walked across the sheep field to the tractor to inform him about his escapee. Its been a sheep week, the day before Diana spotted a ewe on her back with her legs in the air, his is normally only a problem when they have a big wet fleece but this one had been shaun, but she was laying in a hollow and looked as if she may have been in lamb, again I was able to get off onto the field and go and roll her back on her feet.

We arrived at Marston Doles Top Lock to find a queue of 5 boats, luckily two of them were able to share a lock, I bet BW weren't expecting that when they stuck there silly notices on the beams telling you to share locks to save water. We arrived back at our moorings at about 12 30 to unload and lock up before heading home