Last nigh we still had boats passing in the dark, as the last one went by, a Wilderness towing what looked like a sailing yacht it started spitting with rain,so I closed the engine room doors before going to bed. Good move as over night we had torrential rain hammering to the boat roof.

This morning it had all gone and the day looked very hopefully, we set off down the flight a few minutes before 10 am and with a steady flow of boats coming up had a fair run to the bottom where we stopped for water. While the tank was filling I returned a JJ Memorial banner that I had removed from the lock to Graham as well as giving him a CD of all the photos that I took over the weekend. It was then that I learnt the sad news that the Folly was now closed as the Landlady had given up the tenancy on closing Sunday night.

Once full of water we headed off in the sunshine towards Braunston and that is how long it lasted, Just on the puddle banks the heavens opened and poured its contents on to us, we continued as far as Willoughby before pulling over and heading inside into the dry, it was not long before the sun was out and we were off again, we had taken the opportunity to eat lunch. 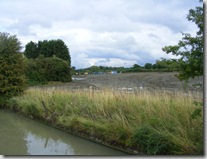 The Barby marina is coming on well with a few holes in the ground and lots of mud about, they will still be pushed to open in the autumn.
We carried on north and as I approached Moors Bridge No. 73 a large Willow Wren boat come through, these boats are renowned for having parties of youngsters onboard so I always treat them with caution. This one came through the bridge and pulled well over towards the towing path, he then shot straight across towards the offside right into my path, I gave it full astern but he still hit me a glancing blow on the front cant and with his bow being far higher than mine removed some gloss paint. I am glad I stopped and not tried to steer round him or he would probably made a right mess of the cabin side.
A short run from here and down through Hillmorton locks which were not without interest, the middle lock has been repaired and when I arrived the crew of a boat coming up had drained it and had the bottom gates open, the boat ahead of us had just entered the towing path lock and was going down. The boat below the lock decided that it wouldn't use the lock its crew had just prepared but would rather wait for the other boat to come down and use that one. So we had to turn the right hand lock and drop down in that, we were still away before the boat coming up had entered the left hand chamber.

At the bottom pair a boat was about to come out of the right hand lock, so I left that for the other boat coming down who had stopped under the bridge and Diana opened the left one for me, she found it a bit difficult as water was flowing over both the top and bottom gate, so she was happy to accept some help from the crew of the other boat going down. 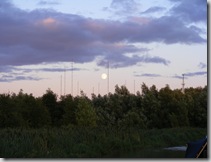 We moored for the night on the Hillmorton visitor moorings which are almost empty about quarter to six. As I look out of the back doors there is a full moon sitting right in the middle of the radio masts