Last nights meal at the Boat and Railway was most enjoyable, we 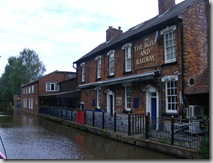 decided on the carvery as we don't have a roast dinner that often. We had a short wait as the chief was just doing a fresh batch of vegetables.There were quite a few people in there but it wasn't crowded, I suspect from the amount of veg used they had been a steady flow of dinners, not forgetting there was also a full menu on.

This morning we set off at 10 am.  just through the bridge to the water point opposite the pub, at the adjoining tap as a Canal Club boat who had been moored bow with us last night, they had been up to Stoke Prior and one lock to wind and were heading back to Worcester. We pulled away just ahead of them but met up at the first lock where I learned that he came from Cromer in Norfolk and had been boating for several years. After this we met boats the next few lock but we caught up with the Brook Line hire boat ahead of us. We saw them out of the lock as a Black Prince boat arrived followed some way back by a Viking Afloat boat. The son who obviously knew what he was doing told dad to keep well to the right and they would get on later. The BP tied his fore line to the bollard on the lock waiting area, then his stern rope. I enquired if he was coming into the lock and the reply surprised me "No we are just going to wait here for a bit, that chap behind can go first", By now the VA was tangling with the BL boat and they were both across the cut, The CC had caught us up and were just above the lock moorings. By now Mr BP had decided that he would come up, as he left the lock he slid into me, he was steering and his wife was operating the throttle/gear change, once away from me he then went into the front of CC and as I locked down he was mooring up to the lock moorings above the lock. I got the feeling that this was probably their first and last canal holiday.

After this we continued down to Droitwich where we moored to have a look at the restored Droitwich canal. As it was half past twelve we decided that an early lunch in the Eagle and Sun was called for, good job we went there first, we could have a table if we were away by 1-30 pm. The carvery was of the same high standard as the last time we visited with loads of vegetable choices. While we were eating lunch there was a short but very heavy shower that started and ended abruptly but would have  give us a good wetting. Over lunch we though it might be better to abandon our river trip to Stourport as we had heard that the river was closed but as we left the pub nb. Wandering Bark came by and he had come up from Gloucester the day before and said things were improving fast, so the trip is on again.

We had a walk down the Droitwich locks and chatted to a chap adjusting the levels, it hard to say when the canal will be open,at the moment there is a leak in the first pound that floods the road and the third lock has to be left empty with the gates open because there is no safety ladder installed. Looking at the profile of the new section the bed slopes very gradually from the sides and I would think two boats will have to touch to pass.

BW have installed some posts along the towing path with a question on one side and the answer on the other, One said "What can you hear" the answer was reeds swaying and Reed Warblers singing, all I could hear was the cars roaring by on the road behind me. I wonder when they last heard a Reed Warbler there, still it gives BW an excuse to waste more of our money. In Hanbury Wharf marina was a brand new boat from Poland still wrapped in sticky plastic film.

We now had a spell of not meeting any boats and having to turn the locks when we arrived at them, even if we did meet a boat the lock was

wrong when we got there, A few miles outside Worcester we passed a canal side cement making yard, not only did they have their own moorings but they also had what looked like a boat loading facility cantilevered out over the canal, it all looked very new,I wonder how often if ever its been used.

After the rain at lunchtime the sky was now bright blue and to end the afternoon we were to start meeting boats at locks again, We moored for the night on the visitor moorings at The Commandery just above the lock tying up a little after 6 pm.