Last night we were moored right outside the “Fort St George” in Cambridge so we went there to eat. 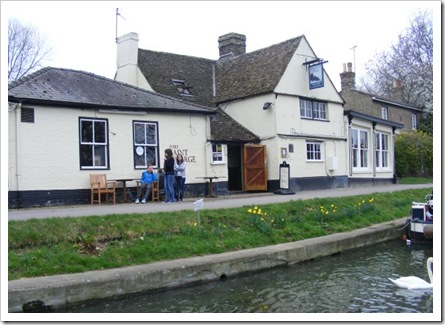 The food was good and they had a few beers on the pump including their own. We had just finished eating when half the crew of n.b. Lucky Duck joined us for drinks and a long chat about the Cam. We expected the mooring to be noisy but were pleasantly surprised.
Cambridge is very short of visitor moorings in the town, and we only counted 4, One outside the pub and three on the other side closer to the lock.

One of the problems is the moorings are 48 hr. with no return in 7 days, so people who want to moor in Cambridge but can’t get an official mooring spend 2 day on one mooring then move to the other side for 2 days before going out of tow for 3 days and then going round again. If I come down again and can’t find a mooring I shall just moor on the common where you are supposed to have a permit, but it says if you moor without one they will take legal action to evict you, I would be gone by then.

This morning was spent wandering around town before setting off to fill with water. The services are up by the lock and it was a good job we didn’t want a pump out as it was U/S, the pump people arrived while we were still filling with water, well it took us an hour.

We made our way down stream meeting several rowers on the way, passing the Plough pub at Fen Ditton http://www.theploughfenditton.co.uk which is right on the river side. We did consider stopping but all their frontage has Private, No Mooring signs. I have contacted them to find out if this includes boaters who want to eat.

At Baits Bite Lock the little chap sprinted out of his office to take our number as we locked down. The EA Abloy key fits the control box on this lock the same as AE locks.

The next lock we came to marks the end of the Cam Conservancy navigation, its Bottisham Lock. When locking down in a Narrowboat take care as the upstream lock landing is cantilevered and is high enough to let your gunwales slide under the timbers so you could easily damage the cabin side paintwork.

After this we found that the river level had fallen a bit since we came up so that must be several miles of water that has gone down as the next lock down is Denver Sluice. We continued down stream in a very cool freshening breeze until we reached the EA moorings at Upware, and as it was 4pm we pulled in for the night.

Posted by Brian and Diana on NB Harnser http://nbharnser.blogspot.com at 17:51