Last night every visitor mooring in Fenny Compton was full, with boats moored on bends and in bridge holes and all the time there was 300 foot of empty long term mooring, 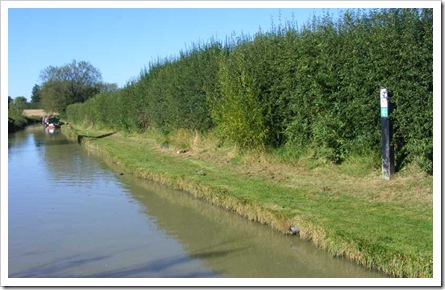 with mooring rings sitting there just waiting to be used.
Dinner was taken at The Wharf where unfortunately Diana’s dinner came with cold mashed potato and had to be sent back, but it was soon rectified with a fresh portion, an added bonus was they had Black Sheep Bitter on.
We found the railway a bit intrusive which was a surprise considering we were moored to the north of the pub and bridge. We were away at quarter to ten having to wait at the bridge as a boat had just left the water point coming towards us and another was winding. By the time we went through the bridge there were two others waiting to go through and two more boat on the water points. It was 15 minutes before we passed where we had moored last night. 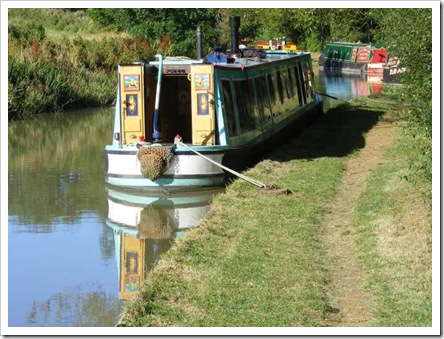 We met several boats on the first part of our journey and about half way to Marston Doles we had two boats catch up with us so we pulled over to let them pass, only to catch up with the back one at Marston Doles top lock, but it didn’t matter as we wanted to fill with water and as its not the fastest tap in the world we also ate our dinner. Boats came and went, we were full of water just as a boat came up the lock, a lady looked round the corner, I thought she was on the boat coming out of the lock so I indicated that we were coming down. It turned out that she was actually the lady from n.b. Herbie who was coming up the lock to wind and then heading to Calcutt to have a vibration on their BMC engine checked out. Once down the two locks we stopped at Holt Farm where we use to moor as we are planning to leave Harnser here for a couple of days.

Thank you for such a fantastic web site. On what other blog could anyone get this kind of information written in such an insightful way? I have a presentation that I am just now working on, and I have been looking for such info.

Nice to have met you. Pity we didn't have more time to chat. We're back on our way now with new engine mounts and a new camshaft. I have a pain in my wallet!
Tomorrow we have to do napton locks all over again.