We the got the forecast rain overnight, all half inch of it with more forecast for tonight. We didn’t rise very early but when we did go out at 10-30 to take a photograph of Harnser

moored overnight on a lock landing “again” that’s 4 times now a boat arrived wielding a windlass and asking if we intended to go down. I pointed out the stoppage and told them they were number 3 in the queue, after us. So they moored up and started a noisy petrol generator on their back deck.
We then took a wander down the flight, meeting a chap who was expecting two boats to arrive that he was going to help down the flight. Apparently he spends his time doing this and some boats actually ring him up and book him for the trip as these boats had done, but they failed to turn up. His day wasn’t wasted as he helped the first boat in the queue who was single handing down, so that speeded things for us as well. Be chatted to the CaRT supervisor further down the flight who told us that all being well they would have us on our way early afternoon which was good news, they still had quite a bit of fencing to remove from round the locks. Walking back we chatted to the chap who was running water down to refill the flight, it turned out that he had use to be the lock keeper for the flight for 15 years.

At 12-30 they removed the padlocks from the top lock and the single hander and helper were on their way, they had a good road and he assured us we wouldn’t see them again. We set off 15 minutes latter with all the locks against us, as we went down we back set for the boat behind until we lost sight of them, we couldn’t work ahead because the other boat was just in front. We met the first boat coming up at the motorway tunnel which gave us one lock in our favour. We caught the other boat up as they were going into lock 14 which is where the towing path has been closed for 6 months for resurfacing 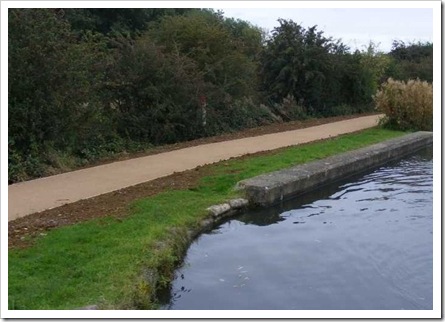 From here it was very slow going, not only was there a lot of weed but as the arm has been closed for a month this long pound was down by a 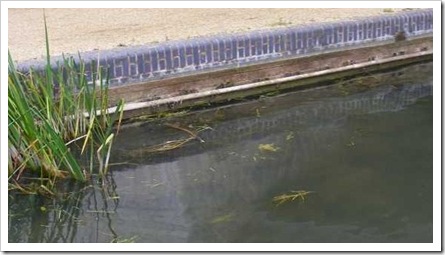 foot.  The chap ahead made much better time than us so we didn’t see him again, but passed his boat moored in Northampton. We met a couple more boat but nether of them were of help to us, the last one being just as we entered the river at 4-15 pm. It had taken us three and a half hours. had we been first in the queue it would have been about 3.

The river was not running very fast at all when we joined so lets hope it stays that way. We dropped down through one lock in the town and stopped for a pump out and fill with water. The pumpout was fine but we were unable to access the water tap so showers will be on ration for a couple of days,
By the time we reached the moorings at Midsummer Meadow it was 5 pm. and as there was only one other boat moored there we decided that we would join them for the nigh. I was quite impressed with his anchor storage 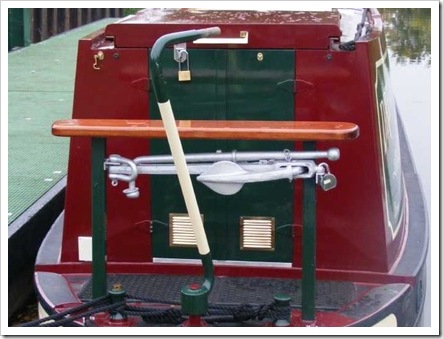 , but if it was me I think I would have it unlocked and with a rope attached while travelling on the river.