Last night plan was to walk into town and find somewhere to eat, but about 6-30 it started to rain and decided not to stop until early this morning.

Overnight  we had 11.6 mm of rain and every time I woke it was still raining so I was surprised how benign the river seemed at this morning.
We set off at ten to eight, it was an absolutely gorgeous 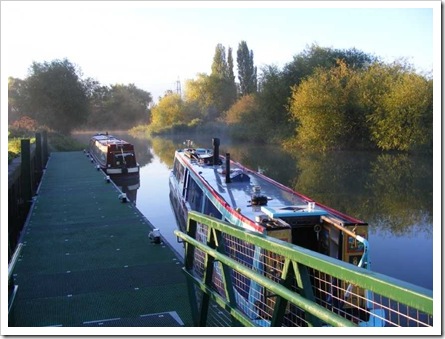 morning, not a breath of wind or a cloud in the sky, the river was calm and pleasant.  We met a couple of Narrowboats, one on the Washlands 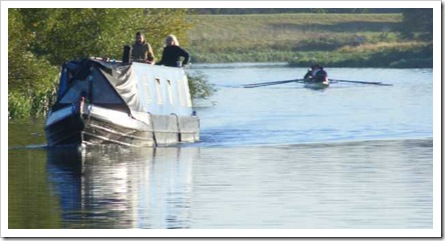 and another just above Clifford Hill lock, but they had both already turned the lock when we arrived as they have to be left empty.
Below Billing the river increased in speed quite a bit and we thought our travels for the day had ended at White Mill lock as the section of river above that was up a foot which resulted in a lot of water topping the gates 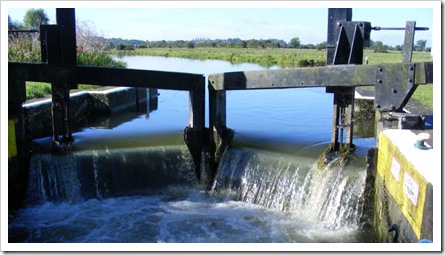 at both ends of the lock, Diana and I were only just able to push the gate open. The strange thing was that the river above Whiston Lock was actually low, it must be due to the way the sluices are set. We continued on with a good flow behind us to stop in Wellingborough to fill with water. The pumpout and Elsan disposal are still not commissioned. The water level through Wellingborough was 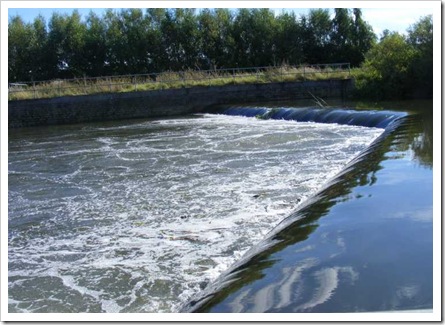 normal which is not surprising when you see the size of the weir. At Ditchford lock there was a broken down cruiser on the lock landing with RCR in attendance. The plan was to take the outboard engine away for repair but they needed to get it off the lock landing  to the other side of the river. They had a rope long enough but it was to far to through. So I took the rope and reversed back up and across the river while Diana set the lock. The sluice for this lock is right beside it. The reversing bit went well and I passed on the rope to the lady owner. I should have reversed further up the river but was afraid that I would foul the rope even with them holding it high coming back, but I didn’t. I approached the lock and clipped the wall which pushed the bows to the left and the weir stream got the stern and pulled that to the right, there was no way I could straighten up against the flow. I fad the bow in the mouth of the lock and the stern across the weir stream at about 45 deg. I gave it full welly hard left which wedged the bows against the right hand gate. Left it like that and took the bow role to the left hand wall of the lock and started heaving, The RCR chap sat on the right wall with boat feet pushing the bow out, between us we managed to inch it round and into the lock. I can assure you it was not a pleasant experience. 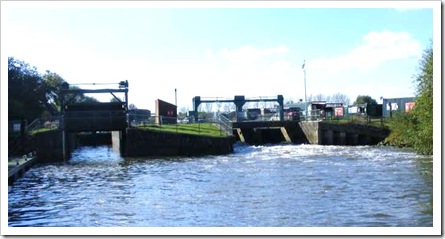 I completely underestimated how much water was going over the weir. As we left the lock the headroom was just 1.7 Mt. I just got out. When we reached Higham Ferris lock we decided to moor for the night and let the levels drop a bit, we had been there about 20 minutes when a boat came up and said the Irthlingborough bridge was fine and the 48 hr. moorings. Armed with this information we continued on and moored outside the old Diamonds ground with one other boat at 5 pm.

A scary moment at Ditchford!