This morning a chap from the EA turned up to give us the latest information. It seemed that there is 1.55 Mt headroom at Islip footbridge, its nominal clearance is 2.5 Mt. He suggested we ring at about 1 pm for an update. A short time later we noticed that Straw Bear and the cruiser had gone. We took a walk down to the lock to see what state it was the river was lower down. It looked to be at normal level and where we were moored it was down by 10” 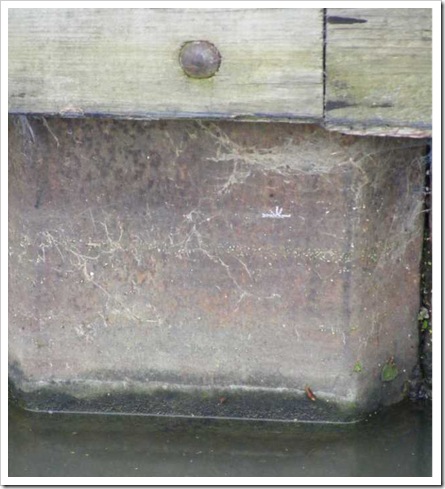 or more. I marked it at water level on the piling when we arrived.
After discussion with the other two boats we decided to set off with them following about an hour later and we would ring back with information.
So at 1050 we were on our way. There were quite a few canoes from the Outdoor Adventure Centre

just below the lock and we were a bit worried about the water flow when we lifted the gate, but their instructor assured us they would be fine and just carry on. The flow below the lock was very slow for about half a mile where another stream joined the river when it picked up a bit until we reached Upper Ringstead lock, after that it was quite gentle until we reached Denford lock where we found Straw Bear and the cruiser  moored above the lock. They had ring ahead and been told not to go any further, there were still 4 boats at Islip lock and no where to moor, so we pulled in beside them. I rang back to the others and they decided to stay at Lower Ringstead lock for the time being.
After a bit of discussion the cruiser decided to head on down working on the basis that he could moor above Thrapston bridge of if any boats were going down tuck in behind them. This just left the two of us on the lock landing so we singled out.
About 2 pm. another boat came down the river heading for the other side of St Ives. We advised him of the situation and he moored on the lower lock landing before cycling in to Thrapston to look at the situation himself.
When he returned he had the news that the place was still full of boats, the level under the bridge was now 1.7 Mt. and the “Strong Stream” is still in force. The duty EA engineer would lift the strong stream warning in the morning at 8 am. if the bridge clearance was up to 1.8 Mt. so we are all here for the night.

Hello Harnser, this is Nancy IV cruiser that made it through to Oundle Marina by 1800hrs today(8-10-12).
We are very grateful to yourselves and all others that helped us with good information and friendliness.
Flow rate was managable but headroom was a concern at Islip which although was at 1.7 we still had roughly 15cm to spare!
Titchmarsh lock was also fast filling with no need to open paddles. Oundle road bridge got a big cheer as we took the mouth of the Marina several cheers later!
Happy boating.