Last night dinner was taken at The Boat House which was quite enjoyable. 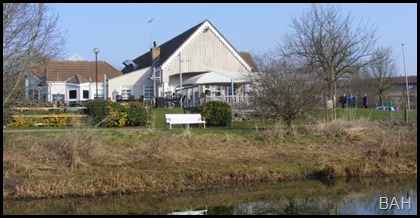 Overnight the temperature dropped to –2.5°C and this morning there was ice around the edge of the bay even though we are only just off the river.

Looking out shortly before leaving we found we had a group of fishermen on the moorings near the bows.

We eased out without disturbing their fishing at 10 AM and headed back downstream to the town where we moored in the lay-by behind NB.Indulgence and made our way into the town for the day. It was like a late spring day with bright sun and very little wind and temperatures above 16°C.
We did a small amount of shopping, a pair of bootlaces and then headed off to the Cathedral for the morning. Lunch main course with wine was taken at Pizzaexpress which is housed in a rather 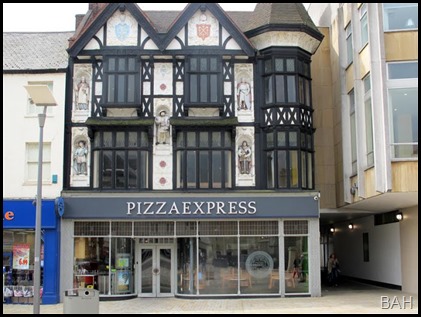 grand old building, but we went to  Patisserie Valerie for coffee and dessert.
The afternoon was spent at the Peterborough Vivacity museum which houses of of the very few original hospital operating theatres complete with floor to ceiling white tiles. If was one of the first hospitals to use anaesthetics and antiseptics.
After returning to Harnser we pushed of at about 5PM just after the plumber arrived to mend the tap that flew off yesterday, the only problem was he didn’t have a key to the enclosure.
No sooner had we pushed off than looking back I spotted a seal swimming in the river. I don’t know how often seals get this far up the river. Unfortunately he kept diving and we were some way from him next time he surfaced for me to take a photo. 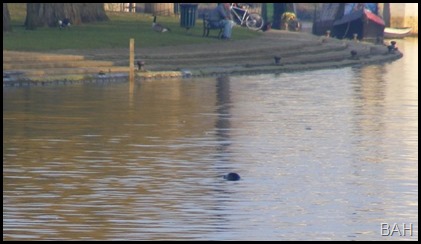 We carried on back upstream back to the Rowing Lake to moor for the night. When we arrived there were several fishermen spread out along the moorings but some of them just packing up, so we tucked in right on the end and then moved onto the straight once they had left.

We were treated to a beautiful sunset as the sun dropped down below the rowing course.