Last night I sat listening to the birds and realised that the last time I heard a Bittern call was 1963 when I lived at Fleggburgh and was still at school. If you have never heard or seen one there is a BBC video HERE .

As we went to bed there was not a breath of wind and the river was like a mill pond. Something disturbed the geese over on the mere and they made a horrendous din for a couple on minutes but then it all went quiet again and stayed that way all night.

This morning was overcast with a light breeze, however this was soon to freshen again with gusts up to 28MPH. The cruiser that was moored behind us set off first and we followed at 1030 AM. There has been some repair work on the opposite flood bank this year year the top being levelled up.

As we travelled upstream we met a Black Prince Narrowboat coming down, we had seen the same boat and crew at the head of the River Wissey.

It wasn’t long before we crossed the Cut Off Channel on the aqueduct and then under the sluice, this one is twice as big as the one on the Wissey with two gates for the river flow, also this one doesn’t have a bracket to prevent the gate being lowered.

The gate on the left is used for navigation as the aperture has more head room, the one on the right is just for water flow.

We have seen lots of birds about including all sorts of geese, they  have been mainly Canada Geese but we have seen a few Egyptian ones. 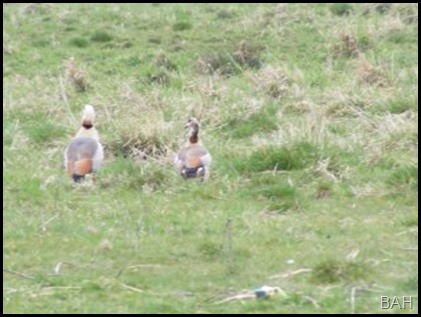 The next point of interest was the railway bridge, for some reason they have gone to the trouble of erecting a sign saying you can navigate ether arch, why they didn’t just put the normal “keep right” ones in I don’t know. I went through the right 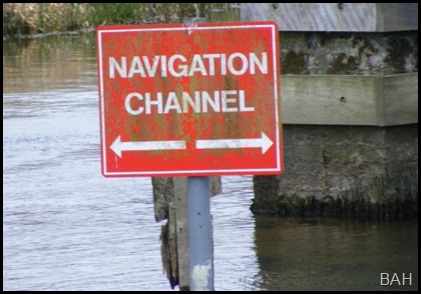 arch, but the hire boat following went through the left arch.

When the hire boat finally caught up I eased right off to let him pass, hoping he wouldn’t take the last mooring space at Brandon.

When we arrived at Brandon the cruiser that was behind us was moored right at the end of the jetty and the hire boat was negotiating his way into the lock approach which doglegs off to the left, so we were able to moor behind the cruiser, I expect that was where Black Prince were last night.
Unfortunately we can’t go any further, there is a perfectly serviceable, electrified lock ahead of us that the National Rivers Authority, now the EA rebuild in 1995, the problem is it just 40 foot long. At the time they said the reason for rebuilding it at the same length was that longer boats had never wanted to go through, they couldn't !!!!!!!!!

It took the hire boat some time to get into the lock approach, but then to our surprise they didn’t go through the lock but merely moored to the lock moorings for a couple of hours before turning round in the mouth of the lock and heading off downstream again.