It is a nice quiet mooring by the Old Engine House at Stretham with just a faint dawn chorus this morning at silly o’clock. the only downside was the amount and size of the dog muck up by the road.
A little after 8 am the hire boat moored in front of us left to get back to Ely, its a pity the one that came along three quarters of an hour later didn’t have the sense to leave early then he wouldn’t have needed to go so fast. When I let go at ten our mooring pin had been pulled through the ground by about 3”.

It was bitterly cold as we made our way along the Old West River to Hermitage Lock passing the Lazy Otter on the way. A few flurries of snow but mainly dull and cold.
I pulled against the landing stage below the lock and walked up to see the lock keeper, is office is the other side of a busy road that crosses the lock making it bit of a concrete tunnel. As I reached the gate onto the road I could see both the lock keeper and a narrowboat coming the other way, so it was only a short wait until they were coming out and we could go it.

At the moment there is no lock landing above the lock, so boats coming down ring ahead and the keeper has the lock ready for them. We were to find the new floating lock landing sections with a barge and a tug all moored to the service point at Erith, these take up a fair amount of the river and with it being rather high you cant see where the banks are.

I am very glad I have been this way before as with so much water the banks of the river could be anywhere. 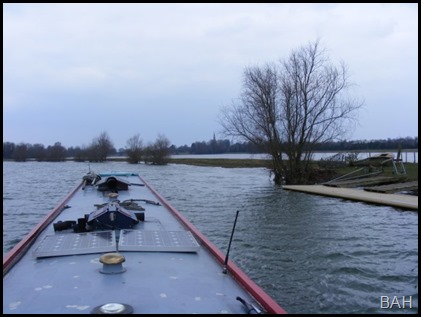 This tree is just sitting in a vast expanse of water, you can just see a bit of the bank in the distance, but you have to know which side of it to pass.

When you first leave Hermitage lock there are a row of red buoys that get you started on the right track because that end is always wide and shallow, but they are not a lot of help when you are a mile upstream.

Eventually we came to Brownhills Staunch where all the sluice gates were fully open. This put the lock on the level but you still have to wait 2 minutes for the lock to equalise before you can fully lift the gate. Had the level been any higher then both gates would have been underwater. 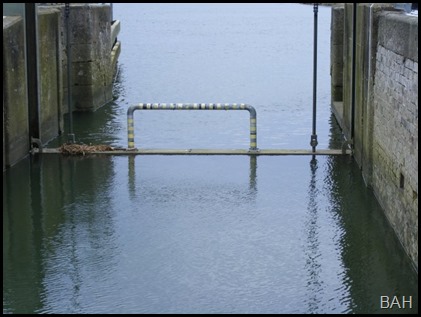 Not far above Brownhills Staunch on your right you come to The Pike and Eel, this is a very popular riverside pub and you are normally very lucky indeed if there is room to moor a Narrowboat, not today, there was not another boat in site, although one did come in moor behind us not long after we arrived. As I type they have just left and gone into the marina, The wind has picked up to a steady 20mph and things are rattling a bit, I will have to check round later or it will probably keep us awake tonight.

If you click on this map link  you can see what the river should look like where the landing stages are moored..