First an update from yesterday with the roller question. I received an email and a message saying that the same type of roller can be found on the Huddersfield canal where the Huddersfield society say they were used to remove the drainage plug from the bed of the canal. Thanks Chris and John.

This morning we woke to the sound of rain yet again so we didn’t hurry away, that’s another 9mm in 24 hrs we have had since the last blog and I have had a raincoat on all day as we have had several showers. needless to say that since we moored up the sun has been out and we have had no more rain.

Yesterday when we turned into the Macclesfield Canal a boater was trying to float a boom across the old stop lock saying there was a diesel leak further up the canal and they were trying to stop it getting to the Peak Forrest Canal. We had seen diesel on the water when we came up a couple of days ago but put it down to someone pumping their bilge. Today there were booms beside the canal at bridge 5 and two chaps were digging into the bank above it. I have a feeling the farmer may find it expensive if that is where it originated.

Just before bridge 13 CRT are doing more piling work, this time its all from the bank. The white car had driven about half a mile along the tow path/roadway and was not going anywhere for a while. The machine they were using for the piling looked most ungainly and he had manoeuvred his self into a tight spot to reach the piles. 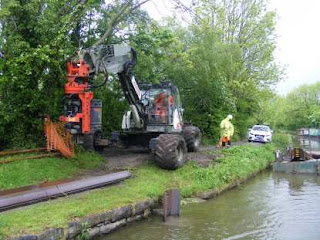 In the distance to the east between bridges 13 and 14 we could see a tower in the distance. A bit of time on Google maps after we had moored up showed that this was The Cage, an old keepers lodge in the grounds of Lyme Park now owned by the National Trust 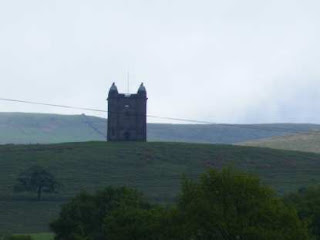 We stopped for diesel at Bailey’s Trading post by bridge 15 for which they were charging 72p/lt for domestic. They also have quite a well stocked small chandlery as well as selling coal and gas. The diesel is a bit slow as its gravity fed from quite a small tank, this also means its fresh as they have at least one delivery every week.

We passed this rather sad site where CRT have put up warning notices saying beware sunk boat on A4 paper, the boat is a lot more visible than the notices. 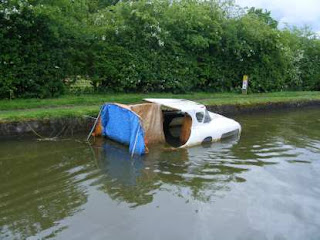 I was rather impressed with this tree house in someone’s garden overlooking the canal. Not sure about the ghost looking out. 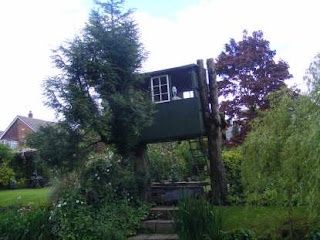 We passed Clarence Mill in Bollington between the showers where Diana managed to photograph a rather stunning reflection. 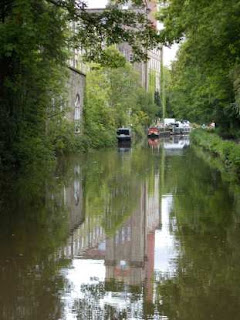 We moored near here last time but today we were carrying on to the other side of Bollington to moor by  The Adelphi Mill. 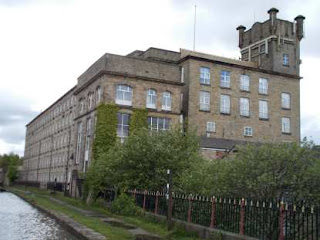 After a bit of shopping at the Co-op and don’t go looking for it where it shows it on Google Maps because it has moved a bit further up Wellington Road to beside bridge where the old railway crosses which is now Middlewood Way. Diana went for a climb up to White Nancy a folly that stands 1000ft above sea level. 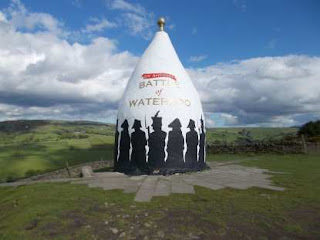 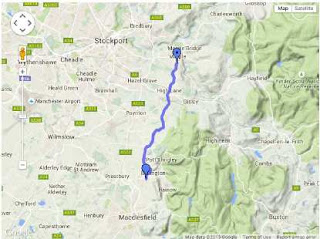