Bit of a change last night, instead of waking in the morning to rain, it did it at half midnight, but only 3mm.

We set off this morning and I put my coat on just in case, we did have a few spots. Our first port of call was Macclesfield just passed the Hovis Mill where we topped up with water. 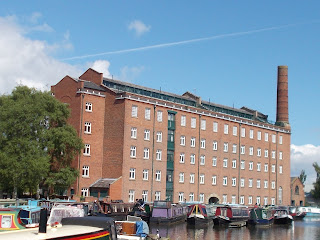 I have just read in Towpath Talk that the new floating moorings that we moored at on our way up cost £130000.
As we left Macclesfield we passed this crock sunning himself in someone’s garden. As you see nothing phases a cat. 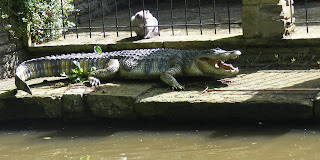 There is a fair length of visitor moorings at Gurnett aqueduct, it was here that we passed Carol and Colin on The Wool Boat, 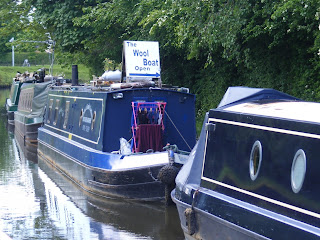 we have seen the boat several times while we have been out this time but this is the first time there was any sign of life, probably because it wasn’t raining for once.


We pulled over to dump rubbish at the top of the 12 Bosley lock flight by going down the back of the service block, this left the way clear for a boat just coming up in the top lock. By the time they left we wee ready to go down, we had a very good run with all the locks with us meeting a few boats on the way. Between lock 11 and lock 12 there is a right angle bend under the railway line. When we were going up we met a 30 footer coming out of lock 11 with no problem. today we met a 70ft unpowered butty Gosport going up. Put with 2 chaps bow hauling her it wasn’t a problem and we easily passed. All these locks have a bridge below the tail of the lock so one of the chaps was having to swing the tow line under it and catch the end on the other side. A monkey’s fist in the end of the line aided this operation quite a bit. Since we started down the flight we have had a large hill in view known as “The Cloud” this is 1125 ft high and owned by the National Trust.

Leaving lock 12 we could see the 48hr moorings ahead were quite full but there was about 80ft between the lock moorings and the end of the row, so we have stopped here for the night. Since we have been here there have been several boats leave as well as others arrive. 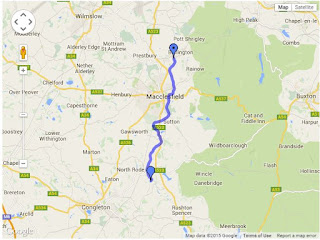 PS. I have just found out its not only me who cant get Microsoft’s Live Writer to talk to Google’s Blogger. Its everyone and they are trying to fix the problem, what caused the problem I don’t know. All the information is at https://productforums.google.com/forum/#!topic/blogger/-49FC2_0l-g