Rained again last night, only ¼” this time but it had stopped before we were ready to leave and since then we have just had a few spots a few times. I still didn’t risk taking my raincoat off.

After listening to Spay with her Bolinder engine come down the flight we set off at ten past ten, we would have been a few minutes earlier but Spay back set the lock for the single hander following him. Fair enough, he didn’t know we were getting ready to leave.
At Meaford Top Lock they have spent months repairing the bridge and what a lovely job they have done to it, they were still working on it in January when we came down. 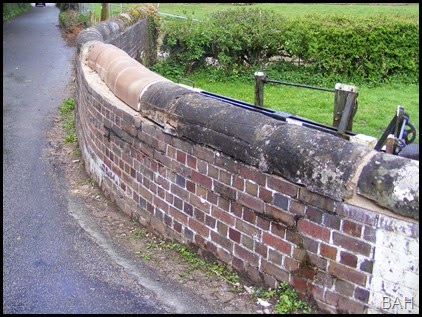 This is how it looks today, something has struck the coping stones dislodging them once again. You can see the deep gouge in the far two stones, thankfully the other wall is untouched.

I only spotted one mile stone along the Trent and Mersey canal and that is at Barlaston, just nestling in the grass by the towpath. 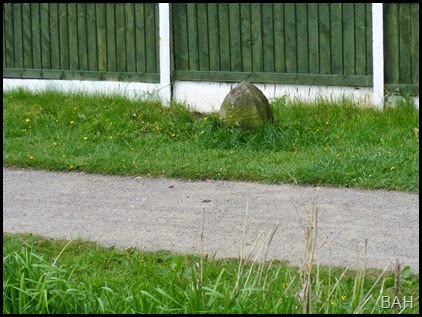 As we passed under Old Road Bridge we were haled by a couple walking along the road, it was Jill and Les from nb. Fenchurch. They had just walked up the the Wedgwood Visitor Centre only to find it hasn’t opened yet following refurbishment. At Trentham lock we caught up with the boat we followed up the last two locks yesterday and we were to see them at every lock until we turned up the Caldon Canal.

Stoke on Trent have erected so very smart signs along the canal and to my surprise the ones we saw today didn’t support any graffiti. 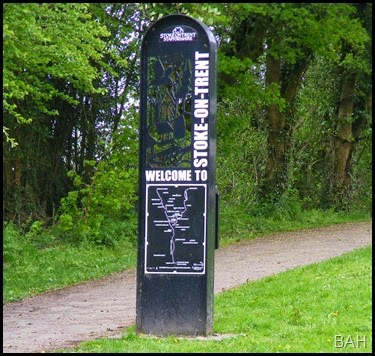 I don’t know if Stoke Council have been spraying the Japanese Knot Weed beside the canal or if it just dies back during the winter, but new shoots are just emerging. As well as these very 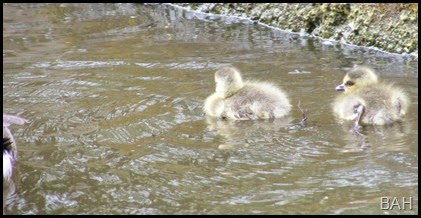 young pair of goslings we were to also see a family of ducklings take to the water for the first time. one was in the water as we approached and mum jumped out to be with the rest, then after we had passed she went back to the water with the lone chick and called the others, in turn they each made a leap of blind faith to land on the surface of the canal like ping pong balls.

We had a slight delay at Etruria as the boat about to enter the top lock coming down insisted that the boat ahead of us shouldn't turn the bottom one as its difficult to pass between them, he said. Once they had locked up, we followed passing one coming down between the locks. While waiting at the bottom I noticed that Fred Dibnah opened the Etruria museum in 1991.

A notice I spotted just above the bottom lock I don’t think I have ever seen on the system anywhere else. 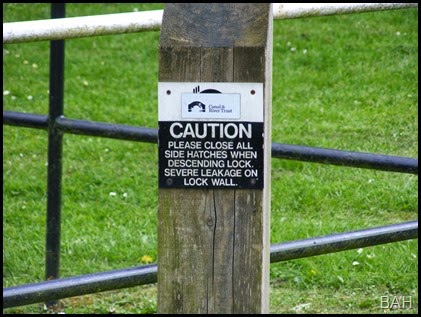 Once up the top lock it was hard right onto the Caldon Canal, the plan was to moor here for the night but the only free mooring was near the bottom of Bedford Street Lock under the Crack Willow trees, so we decided to push on. A boat was just leaving the bottom of the staircase as we arrived so Diana went ahead to fill the top. She found 3 boats waiting to come down, but non had filled the top lock or entered it so she filled it and up we went.

I am most impressed with the cantilevered foot bridge 8A where the end just seems to hang in mid air. 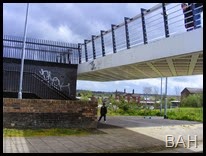 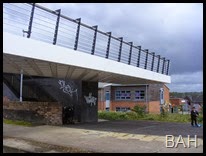 (Since I post this Geoff has told me that this is the second bridge in this location, the first had glass sides and you can guess what happened to them in this area)

This time I cleared the roof before bridge 9 which last time wrecked the weather station and sent the expensive stainless steel Dickinson chimney into the canal. 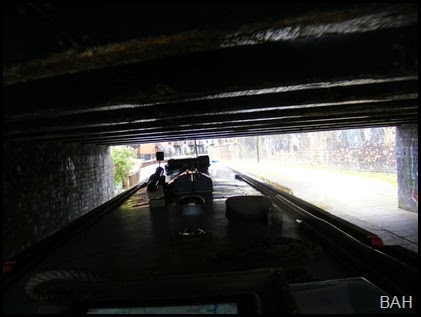 We carried on with something round the prop, several bursts of reverse improved things until we finally moored for the night against a nice length of piling between bridges 14 and 14A 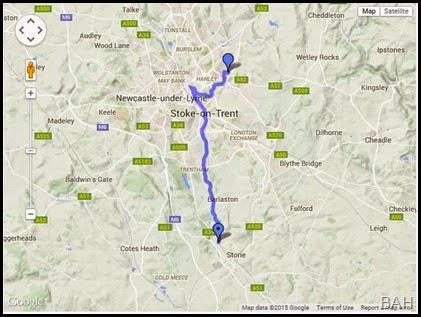 They were still working on the meaford bridge on 20tApril. Such a shame it's been damaged again so soon they were making a good job of it.
Judith and John
nb Serena