The sun stayed with us well into the evening but the noise from the goods trains using the viaduct was a bit intrusive during the evening but didn’t disturb us overnight.

This morning we set off at our normal 10 am. As I pulled gently away from the moorings the engine stalled and I thought I detected a slight bump at the back end. The engine restarted instantly and we pulled away turning back down stream to moor in town for some shopping. I could still detect a slight bump when going from forward to reverse so a look down the weed hatch was called for. What I found was a rope fender, about 3 foot of rope wrapped round the prop shaft and a large wooden hook on the other end of the rope to hang it on the hand rail. I could not unwind it so had to cut the rope to remove the hook and then tease the rope from round the shaft until I could pull up the fender.

After a semi successful shop we headed on downstream, we wanted to fill with water but the boat who had been there some time, just put his hose away as we got level, so I asked if he was leaving, “No, I have the toilet to empty now”  was the reply so we carried on passed the lift. you can clearly see the trough that

runs out to the lift caissons. As we passed there were two boat in the bottom caisson ready to go up and a third waiting for the next operation.

Just below the lift the river bears off to the left and we carry straight ahead along Barnton Cut. 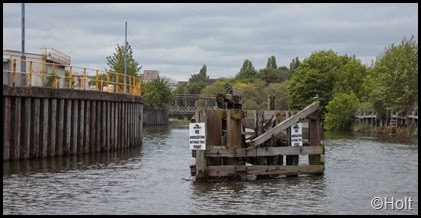 The hills on the eastern side of the river a bit further down were covered in wild garlic and there were a few Bluebells a little further on.

The first swing bridge you come to after this is Winnington Swing Bridge. The air draught is quoted at 8’ 10”, this is OK for Narrowboats as the clearance is all at one end.

We pulled over for lunch at Barnton Cut visitor moorings, there are some really nice moorings along this canal.

At this one there was a memorial seat and standing to one end of it a candle and a bottle of fizz. It was lucky the grass strimmers didn’t hit it and that no one has pinched it. 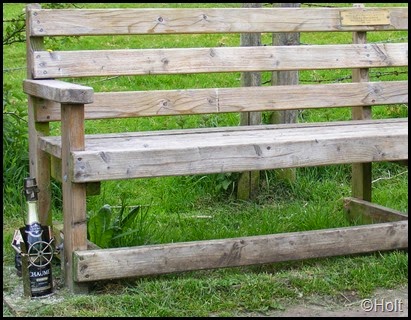 We arrived at Saltisford lock and had to wait a bit as the lock keeper was expecting two boats coming up, but as they didn’t arrive he turned the lock, this is the big lock for sea going ships which is fully powered. WE thought we would be alone it that huge chamber when a pair of hotel boats turned up behind us

Even with the three of us in the lock there was more than enough space to swing several cats round. 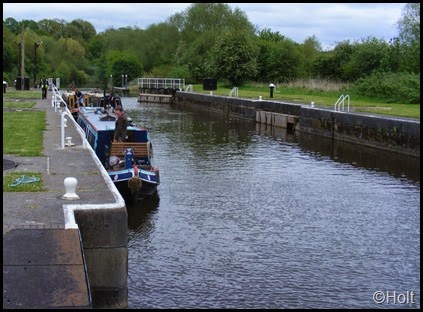 As you can see the lock is fitted with intermediate gates as well, but these are no longer used. The locks are 195 ft X 35 Ft  and can take ships of 1000 tons. (younger readers please note those measurements are in old money) The intermediate gates were to reduce water usage when smaller ships locked through. Today the smaller locks which we have been using above here are derelict and were never powered so even for a small cruiser some 382,882 gallons of water to pass through the lock.

Below the lock we stopped for water so that was the last we expected to see of the hotel pair, but when we arrived at Dutton Lock they were in the chamber with a third boat about to go down, luckily for us the keeper, like all we have met was a decent chap and opened the offside gate for us so we could lock down as well. I was expecting to have to wait until they had gone down and he had turned the lock for us. 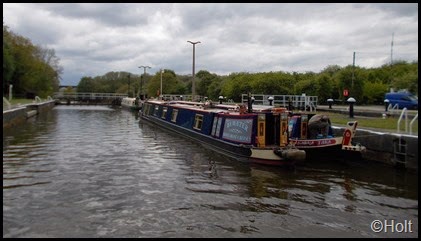 Once the lock was empty the single hander at the front went first and then we followed as the hotel pair were stopping for water below the lock, so again we thought that will be the last we see of them. We carried on under Dutton Railway Viaduct, this was designer by Joseph Locke and George Stephenson and carries the West Coast Main Line across the river.

Soon after this the river runs through a heavily treed cutting of Hatton’s Hey wood  and Big wood before opening out again to low banks and grass land. It was here that we decided to moor for the night. we hadn’t been here long when the hotel pair, Bywater Boats came by and winded before making their way upstream and mooring behind us for the night.

Diana went off for a walk meeting up with some of the hotel boat passengers one of them pointed out these Orchids growing in the woods, we think these are Early Purple Orchid. 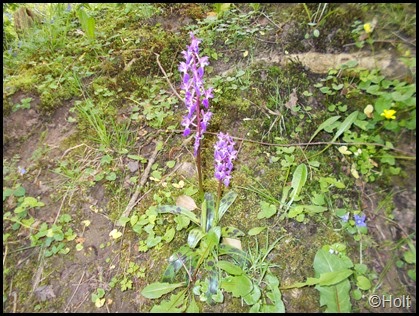 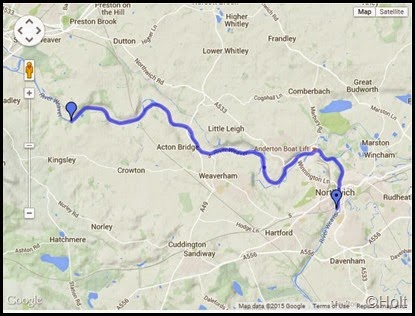