We left at 9 15 am but stopped a few minutes later to see Dave on Nb. Anon who sells leather goods to buy a windlass holder for a fiver. 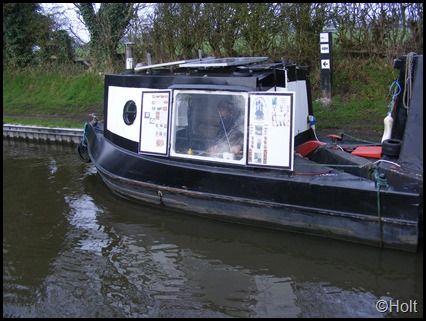 I usually stick the handle of the windlass through the belt loop on my jeans, but its only a mater of time before it busts and I lose the windlass. I have been using it all day and so far I am well impressed.

The weather was fine and the sun trying to break through but a rubbish forecast for the afternoon.
I have asked several people what use to stand beside the canal where it runs closest to the railway at map ref SJ 91912 07094 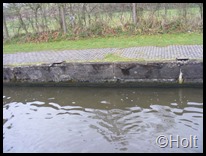 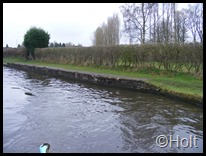 Passing Calf Heath Marina we still cant work out how to get into the pub from the canal. Just passed here we found a dredger and butty almost in the middle of the canal belonging to Sea and Land 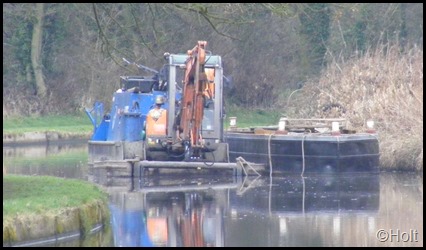 Just before the chemical works there was a tug, 2 flats and one with a toilet on board. We met another couple of flats with push tugs making their way in that direction.

Spring has really sprung with with all the Marsh Marigolds out in full flower as well as the Cowslips. 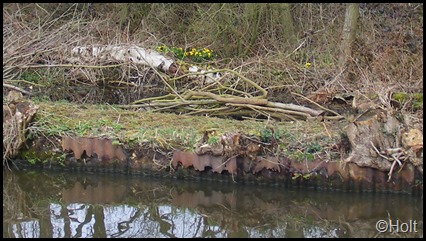 There were quite a few boats around the Gailey and Penkridge area where we were now suffering from April shows, but nothing like the rain forecast. We stopped for lunch in Penkridge before doing another couple of hours. For some reason CRT in their wisdom have marked the Gailey lock moorings below the lock as 48 hr moorings, that could lead to fun when things get a bit busier. 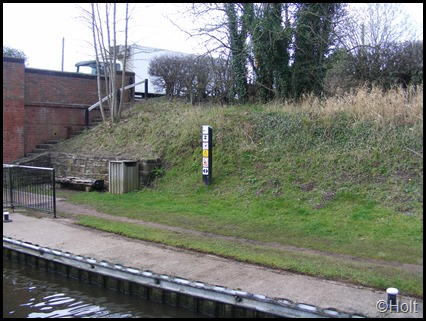 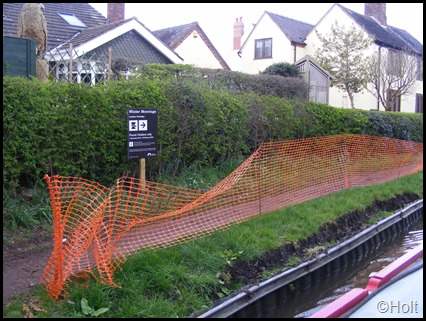 We moored a short way above Deptmore lock for the night in bright sunshine but we could see the rain going round us and since we have been here there have been a few flashes of lightening. 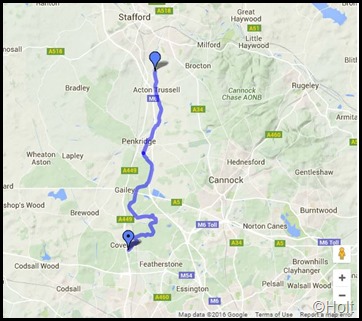 Posted by Brian and Diana on NB Harnser http://nbharnser.blogspot.com at 20:20

Couple of things: I have had one of Dave's holsters for a few years now and find it essential as I am solo most of the time and therefore climb down (and sometimes up) lock ladders. I like to have both hands fully available for this. Tried various trad methods but couldn't find one that worked for me.
About winter mooring places - have you actually seen any that are\were in a sensible and desirable place? About the only one I recall is Penkridge. Fazeley was particularly stupid I thought. Cheers, John NB Samsara

The 4th's blog (my end, at any rate) seems to have gone up twice and while reading this, I was reminded I never replied to the thread about the Haz Subs site on the S & W.

Well, this is where the 'Learned' I referred to then need to come in.

I don't know if any 'services' run under the canal there but there is at least one pipe bridge with the company's stuff within over the cut.

(a)securing the health, safety and welfare of persons at work;

(b)protecting persons other than persons at work against risks to health or safety arising out of or in connection with the activities of persons at work;

(c)controlling the keeping and use of explosive or highly flammable or otherwise dangerous substances, and generally preventing the unlawful acquisition, possession and use of such substances;

(d)controlling the emission into the atmosphere of noxious or offensive substances from premises of any class prescribed for the purposes of this paragraph."

All employers have a duty to ensure, so far as is reasonably practicable, the health, safety and welfare of their employees.

They also have a duty to protect non-employees from risks arising out of their work activities.>

"No person shall intentionally or recklessly interfere with or misuse anything provided in the interests of health, safety or welfare in pursuance of any of the relevant statutory provisions."

Offences due to fault of other person.

(1) Where the commission by any person of an offence under any of the relevant statutory provisions is due to the act or default of some other person, that other person shall be guilty of the offence, and a person may be charged with and convicted of the offence by virtue of this subsection whether or not proceedings are taken against the first-mentioned person."

Subject to the learned's confirmation here, this above clause would be the one that would bite on the the public. My former colleagues would rightly be on the warpath if this were not so!

All the best to you both.

The reason the post came up twice was that after loading it, a spelling error was pointed out to me, Not my strong point, so I opened the blog and corrected it. Not that Live Writer is dead and I use Open Live writer, it doesn.t remove the old posting like the original did, so if I forget, most cases, you get both.

Even the Penkridge Winter moorings were below the lock so boaters would have to go up through the lock every time they wanted water. All the rest in my opinion have been placed in the most inconvenient place they could think of.