We were ready for the off at 9 30 am just as Josephine was coming up the pound, but our joy was quickly dashed bay a hire boat following them. The hire boat did offer to hold back and let me go, but we were in no hurry and declined the offer, however they did tell me there was a single following. I followed them to Welsh Road lock and after they had gone, turned the lock, went in and waited for the following boat. Ten minutes later there was still no sign of it so we assumed they must also be waiting for a second boat to join them and went up alone.
At Bascote we could see Josephine and the hire boat in the staircase, but they had left the top gate open of the lock bellow so we rightly guessed that there was a boat coming down. When the downhill boat arrived he asked if we minded waiting 5 minutes for the single boat following him, which was no problem to us. and the locks would still be with us.
The pound above Bascote was well down and we passed Josephine who had just managed to moor below the Two Boats, it had taken them all that time to find somewhere to get in, the level was probably 10" down and things didn't improve above the next two locks. We arrived at the Blue Lias for the CIBC (Cutweb Internet Boat Club) annual rally about mid day, there were

already boats moored 2 abreast for most of the pub frontage. Those that were there indicated that we should nose in at the back of the line on the 3' of hard edging available which we did, but due to the levels we could only get within about 18" at the front and because of the way the bank drops away the stern was a good twelve foot out but almost in line with the channel. As the afternoon progressed I slowly tightened our moorings drawing us in.
By the early evening the level had risen sufficiently for us to come along side at the front giving easy access for the dog (and us). 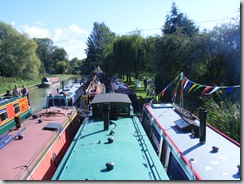 In the course of the afternoon more boats arrived and by the end of the day there were 15 of us moored 3 deep along the front of the pub. Some of us have put bunting up to brighten things up, we have also had members join us by car returning home at night and 3 lots camping for the weekend.