We set off a little after ten, one boat had already passed in both directions. There was not a breath of wind and the sun was having problems breaking through with mist hanging over the cut. 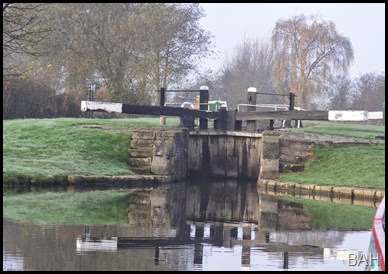 It was surprising how in the still of the night we were able to hear the traffic on the A38, it must be a very busy road.

Passing under the A513 road bridge the local graffiti artists work 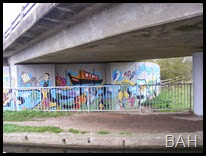 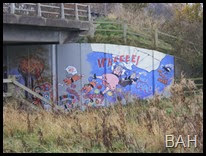 is relatively pleasing to the eye when compared to what gets painted on some structures.
As we approached Bagnell lock a sign told us we were now 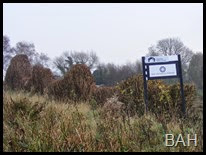 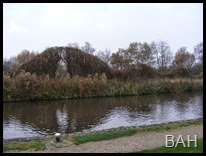 entering the National Forest and there is a large living willow sculpture along side the canal.
This is another lock where CRT have installed stays on the balance beams to hold the gates closed just like those on Junction Lock. 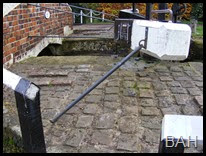 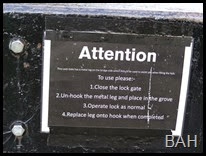 The bridge below the lock shows signs of boats rubbing along the brickwork over the years, I wonder how much of it has happened in the last 50 years compared to the previous 150 years? 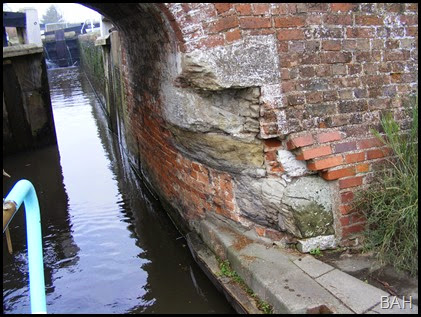 We moored on the 48 hr. moorings and took a wonder round Alrewas with its many pubs, shop, chemists/post office and butchers. We called at the butchers to buy some bread and got tempted by his game pies. I will tell you what they were like tomorrow.

We locked down on the the short bit of the Trent, the water levels were fine, and made good progress to rejoin the canal at Wychnor Lock. From here we were travelling alongside the A38 with waves and hoots from passing lorry drivers. The afternoon was quite drab, I don’t know if it was just mist or this dust cloud that people have been reporting. You can read about it here on the Metcheck web page. We carried on down the canal passed Barton Turns marina, directly opposite their entrance someone is selling diesel on the towpath side for 3p less than them. On into the gloom down Tatenhill lock where an ex working boat has just received a new cabin. The engine hole is riveted but this has imitation planks at the back and no rivets. would the cabin have once been wood? 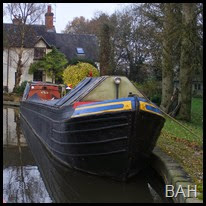 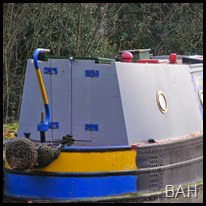 We made our way to Shobnall Marina where we winded and made our way back, by now the sun was going down and although the sky didn’t go bright red it still looked good. 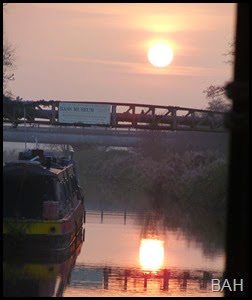 We only did one more lock, Branston Lock before mooring for the night at Branston Water Park. 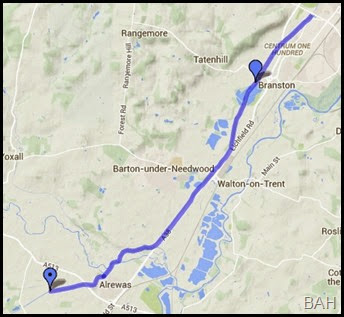