Last night was not only cold with ice on the boat well before bed time it was also very misty and that didn’t clear until lunch time today. 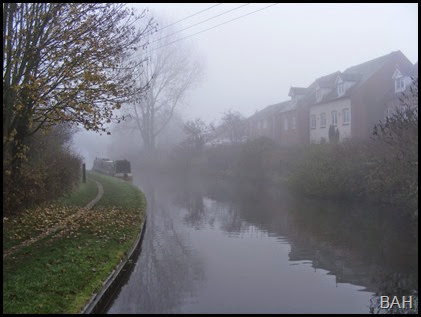 The first job was to tighten the domestic alternator belt as it had let out a couple of squeals yesterday morning when I wound the revs up, the belt has only done a couple of hundred hours. once adjusted we were seeing an extra 10 amp charge at the same engine speed and no noise.

When I poked my head out the back at about 10-30 am I found something I had not experienced before, tufts of grass all over the rear deck, the bank side gunwale and the back end of the roof, I can only assume that the local ducks used us as a restaurant during the night or this morning, they must have been quite quiet.

We pushed off about 10-40 am in the mist and didn’t meet a boat until we entered Rugeley Tunnel, I had just started under the bridge when he spotted me and blew his horn, so I backed up out of his way. It was the only boat all morning. We stopped at the water point just before the Ash Tree Pub where some thoughtful boater had dumped his stove ash on the concrete edging by the mooring bollard so your rope drags in it. Its not there now.

Once full we were off to Rugeley town centre, I have never seen it so empty. Diana went to Morison’s while I went to a couple of places to try to buy some Fernox LS-X leak sealer to try to do a temporary repair to our water pump, but couldn’t get any. I did however find a shop that had just sold out and will have more in on Thursday. It was one of those shops that has everything, knows what you want and knows where everything is. Its called A.V.H Supplies and is in Albion St just the other side on Morrison’s car park.

By now the mist was lifting but it was also clouding over and we had rain forecast for this afternoon, so soon as Diana had finished in Morrison’s we were away. We continued on up through Colwich lock, there were no queues and just as we cleared the top gate it started drizzling, but it was very short lived so we continued on up Haywood Lock and have moored between the top of the lock and the Junction, still in the dry. It was only 3-30 pm but was much darker than previous days at this time. 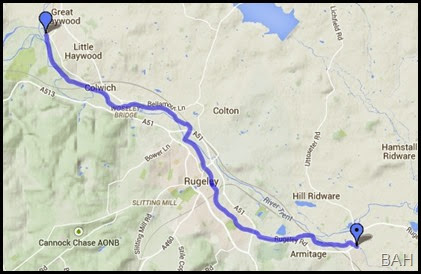