It was a tad windy last night, not continuously but some very strong gusts. We were away this morning shortly before 10 am. and were soon at Colwich lock where we met the first boat of the day which of course put the locks in our favour and we only turned one all day.

On the long pound above Colwich lock someone has gone to the trouble decorating a living Christmas tree on the off side, it must have been a good half mile walk for them. 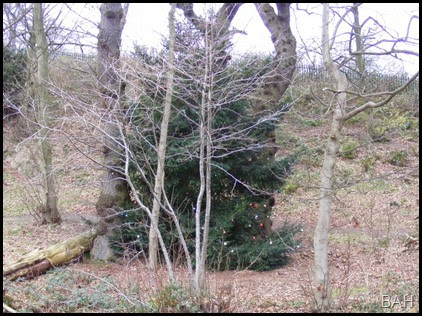 We stopped in Gt Haywood to fill up with water, by now although still breezy it was quite warm and I was steering without a coat on. When I say breezy we have recorded gusts over 40 mph today, but it hasn’t caused us any problem.

Once full or water it was straight on up the T&M through Hoo Mill lock. Along this stretch of canal we have seen several old gipsy vans and horse drawn delivery vans, I think most have been put away for the winter now, but this one was still out. 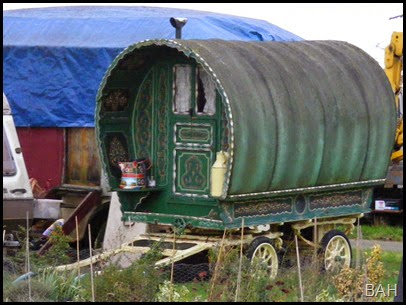 A little further on was a large pile of old lock gates, the most I have ever seen in one place. There must be a use for them if it was only to salvage the iron work.

As we approached a moored boat a lady waved us down and asked if we thought it safe to move as they had been moored there waiting for the wind to drop, as we had met a couple of boats who seemed to be doing OK I told her I thought it would be OK.

On the land to the off side of the canal there are a few ponds and a couple of them have some interesting looking duck houses, this one looks as if it is tethered in the centre of the pond by an overhead cable run between the bank and a tree. I will try for 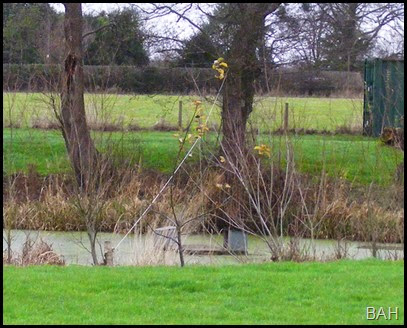 some shots of the others on our return.

By now the sky behind us was quite blue and bright but ahead was quite overcast and threatened rain, we felt the odd spot but other than that it stayed dry but very dull, I misjudged the time by an hour.

We arrived at Stone just on 3 pm and the first mooring we found was a 48 hrs one just before the winding hole below the locks and there was just the one space, so we have tucked in there for the night.

We walked to Morrison's and bought a Turkey crown for Christmas diner. I would guess there will be some bargains to be had in a couple of days time looking at the stock levels. 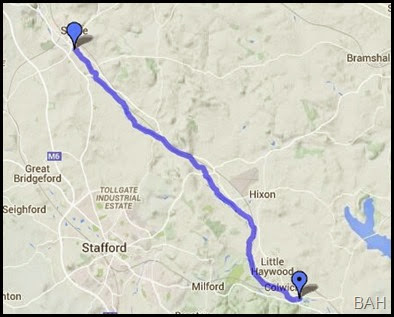